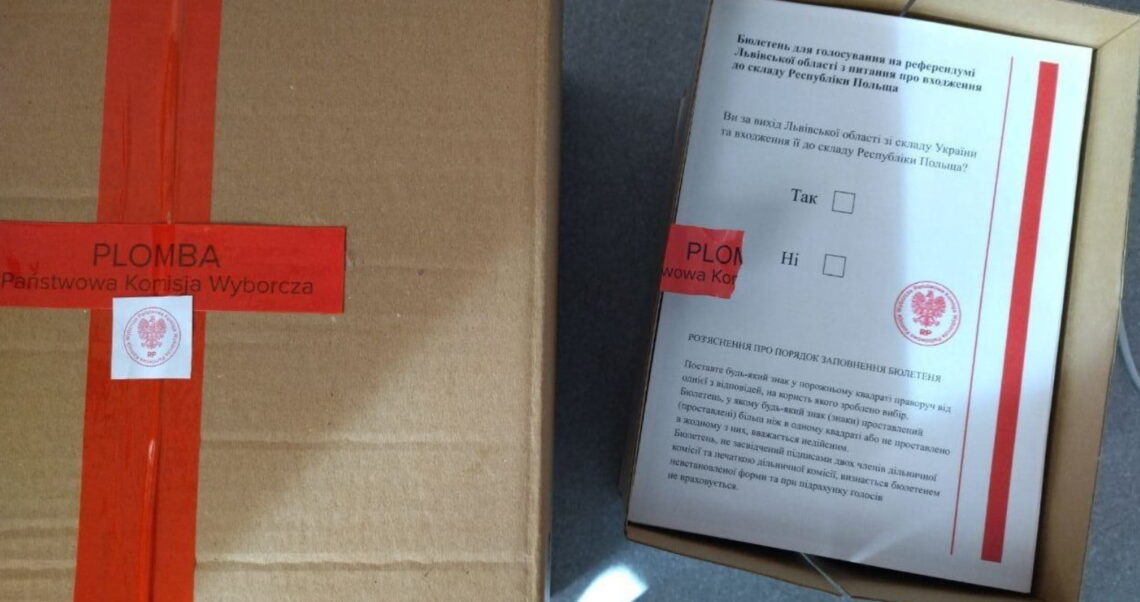 On 27 September 2022, a photo of ballot papers concerning an alleged referendum on the annexation of the Lviv oblast to the Republic of Poland appeared on Russian portals and in social media, including Telegram, vKontakte and Twitter. These packages bear the seal and stamp of the Polish National Electoral Commission. The time of publication of these fabricated materials is not accidental, as it coincides with the end of pseudo-referendums carried out by Russia in the occupied regions: Donetsk, Luhansk, Kherson and Zaporozhe.

Claim:
Poland prepares a referendum on annexing the Lviv Oblast
Our rating:

Refutation by the National Electoral Commission

In an e-mail, we asked the National Electoral Commission to respond to the photos shared by the Russians. In the answer received, we read:

In response to the e-mail of 28 September 2022, we emphasise that the information about any preparations for the alleged referendum, including the preparation, printing or distributing ballots by the National Electoral Commission, is false.

PKW emphasised that both the stamp and the seal differ from the officially used design. Let’s take a closer look at the quality of the Russian counterfeit.

The first conspicuous inaccuracy is the design of the stamp. In the Russian version, the stamp is red, the inscription “Państwowa Komisja Wyborcza” (National Electoral Commission) around the coat of arms is repeated twice, and at the bottom there is an RP abbreviation (short for the Republic of Poland). In the original version, the stamp is in black, the inscription occurs once, the coat of arms has an additional circle around it, and the abbreviation RP does not appear.

Most probably, the Russians based the design not on the actual stamp used by the National Electoral Commission, but the one that could be found on the ballot papers prepared for the so-called “envelope elections” of 2020, which were organised not by the National Electoral Commission, but by the Polish Post. An example of the ballot paper was shared on his Facebook account by Stanisław Żółtek, one of the candidates for the President of the Republic of Poland. In addition to the circular inscription, the coat of arms and the RP abbreviation are consistent with the Russian counterfeit.

The false seal contains the inscription “Państwowa Komisja Wyborcza” (National Electoral Commission), while the original seal, which is used to seal ballot boxes or packages, is described as an “ELECTORAL SEAL” and bears an individual code specific to a particular seal.

Wording of the referendum question

An interesting nuance that may be puzzling in the Lviv ballot is the very wording of the question, which is a calque of questions addressed to Ukrainian citizens during the current, facade referendums carried out in the territories occupied by Russia.

Below, we present the referendum questions from the Kherson and Zaporozhe oblasts and the false package from the Lviv oblast. In all three cases, the question begins with the form “Vy za vykhid…” (Eng. Those for leaving…). These are grammatically correct forms in Ukrainian, but they are informal and are not used in official documents.

On Ukrainian electoral cards, as in Polish, formal questions begin with the particle “Чи“ (Do): “Чи згодні Ви” (Do you agree). The following are examples from the 1991 referendum on the declaration of Ukraine’s independence and from the 2000 referendum on the reform of the political system, where the wording of the questions was formulated in this way.

The National Electoral Commission denied that it had any connection with the photo of the alleged referendum packages shared in the Russian media. Differences in the stamp and seal clearly indicate that the ballot papers have been fabricated.

In Polish politics, the topic of annexing the western lands of Ukraine to Poland does not exist. Russian sources refer only to Konrad Rękas, the deputy head of the pro-Kremlin party Zmiana, whose chairman, Mateusz Piskorski, is accused of espionage for Russia, and his trial is pending before the Warsaw court.

National Museum of the History of Ukraine: https://nmiu.org/novyny-museum/182-tsoho-dnia/1670-10-rokiv-tomu-vidbuvsia-vseukrainskyi-referendum-shchodo-reformuvannia-systemy-derzhavnoho-upravlinnia