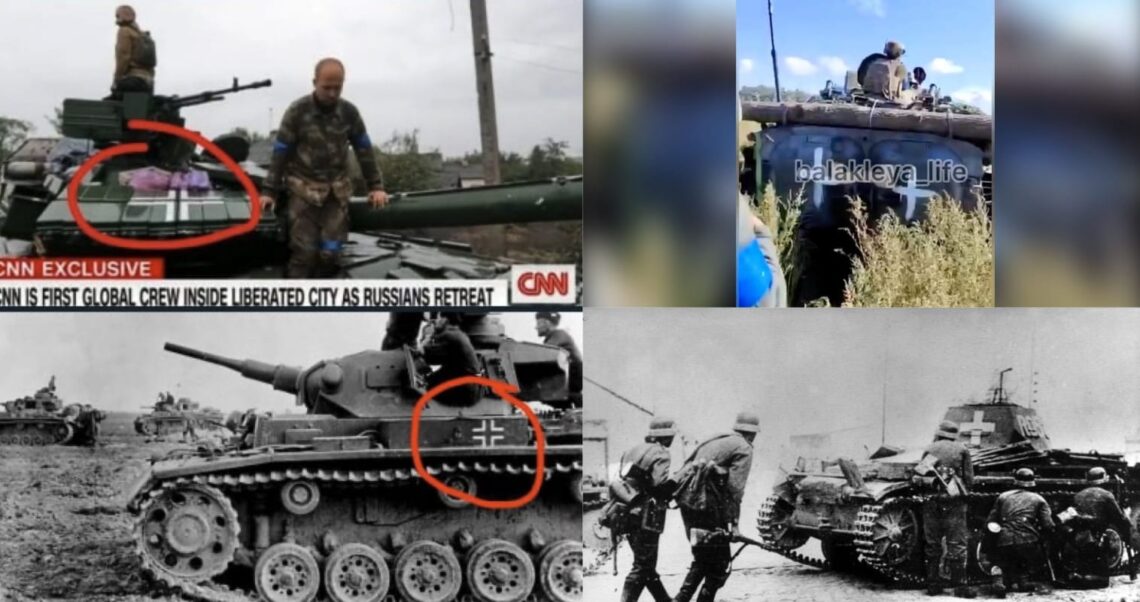 White crosses painted on Ukrainian military vehicles have been circulating on social media for a dozen or so days as a reference to Nazi tank markings during World War II. This narrative is also promoted by official Russian institutions. It is aimed at arousing resentment towards the Ukrainian army and is consistent with the propaganda spread by the Kremlin for years that Kyiv is in fact ruled by the Nazis. However, there is no evidence for such claims, and the analysis indicates that the markings may have a deeper, historical meaning.

Claim:
White crosses on Ukrainian military vehicles are a reference to Nazi markings used on German equipment during World War II
Our rating:

The narrative about Nazi inspirations in the marking of vehicles was promoted particularly eagerly by accounts known for spreading pro-Russian propaganda. One of the examples is the Olej w Głowie account on Telegram. Similar content can also be found on Twitter both in Polish and in English. Shortly after, Russian state institutions, such as the Embassy of the Russian Federation in the United Kingdom, began to spread a similar narrative, posting a tweet suggesting a resemblance of the Ukrainian signs to the Balkenkreuz, an isosceles cross used by the Wehrmacht.

Symbolism of the isosceles cross in Ukraine

The key part of the above issue is that white isosceles cross is an important symbol for Ukrainians. This is where the answer to the mystery of why the headquarters of the Armed Forces of Ukraine decided to use this symbol may be hidden. There is no evidence that Ukrainian white crosses are derived from the Wehrmacht markings.

At the very beginning, it is worth noting that even if there is a deeper meaning behind this symbol, this shape was most probably chosen over some other ones due to logistics reasons. The isosceles cross is a very simple shape to paint and does not require much effort. White paint is generally available and therefore large quantities can be easily and quickly arranged. This sign also enables instant and easy identification of vehicles, which is crucial during offensive actions and beyond. It is also sufficiently different from Russian markings (“V”, “Z”, “O”), which means it would be difficult to confuse them. During the war, pragmatism is extremely important, so this may be the main reason for choosing this mark by the Armed Forces of Ukraine.

The isosceles cross is an important part of the symbolism of the Ukrainian state, and it dates back to Cossack times. It was part of the coat of arms of the founder of the first Cossack Sich, Dmytro Vyshnevetsky, also known as Baida. It was located on the flag of the Zaporozhian Sich in the form of a white isosceles cross, the arms of which widen at the ends.

A very similar cross can also be seen on the Cossack flag from the mid-seventeenth century. It was captured by hetman Janusz Radziwiłł in 1651.

The isosceles cross was also a part of the decoration received by soldiers of the Ukrainian People’s Republic for their participation in the First Winter Campaign at the turn of 1919 and 1920. It took place under the command of Mykhailo Omelianovych-Pavlenko, and its purpose was to move behind the Red Army lines to start guerrilla operations there. The troops were successful, and the whole operation is an important event in Ukraine’s history. Here you can see what the mentioned decoration looks like.

Cossack cross in the emblems of Ukrainian institutions

The isosceles cross is also widely used in the symbols of various institutions on the territory of Ukraine. The Cossack cross (isosceles with expanding arms at the ends) is used, among others, in the coat of arms of the Ministry of Defence of Ukraine, the Armed Forces, the Infantry, the Navy and the Air Forces. Therefore, it clearly has strong connections with military symbolism. Thence, it should come as no surprise that its simplified version is placed on vehicles belonging to the Armed Forces of Ukraine.

It should be noted here that the narrative about white crosses spread on Telegram does not refer exactly to the cross presented by the Russian embassy (Balkenkreuz). For this reason, we will discuss when German troops used specific designations, as well as the historical context of the photos from World War II.

As explained earlier, it is doubtful that Ukrainian troops used the white cross in reference to the markings on German tanks. Most probably, the connection is unintentional. What is more, the Wehrmacht used this sign for a very short time, and this fact is not widely known, unlike the Balkenkreuz, which is unequivocally associated with the Wehrmacht. There are numerous indications that the white cross was used because of historical connotations that go much deeper than World War II. Claims about the alleged Nazi roots of the symbol coincide with the propaganda narratives created by the Kremlin.

In the post on Telegram, shared by the Olej w Głowie profile, we can see a photo of a German tank with troops taking cover behind it. According to the author of the post, the photo comes from the Great Patriotic War.

However, this is not true. The photograph was taken during the fights in Warsaw in September 1939. It features Wehrmacht soldiers using the Panzerkampfwagen II tank as cover. Plain white crosses were painted on German vehicles only during the execution of the Fall Weiss plan (Eng. Case White), i.e. the invasion of Poland by the Third Reich. Below we also present another example of its use in September 1939. In the later stages of the war, German infantry began to use the Balkenkreuz instead of the single-coloured white cross. This can be seen in the second photograph below, which dates back to the invasion of France in May 1940 (the Fall Gelb plan, i.e. Case Yellow).

The term Great Patriotic War, which is used to spread the discussed narratives, refers to the war between the Third Reich and the USSR (from June 1941 through May 1945). It is used primarily by Russian historiography and has a strong propaganda dimension. This would indicate that the content spread is linked to Kremlin propaganda.

The term Great Patriotic War was coined by Soviet propaganda on the basis of the term used in reference to Napoleon’s invasion of Russia in 1812 (Patriotic War). This was thoroughly explained by dr hab. Grzegorz Berendt, associate professor at the University of Gdańsk and the Head of the Museum of the Second World War in Gdańsk, in his interview for Wprost magazine:

“Outside of Russia, it is widely accepted in historiography that the Second World War began in September 1939, with the German attack on Poland. This date is not convenient in the Russian historical narrative, because on September 17 the Soviets joined the invasion of Poland. Thus, the aggression of the Third Reich against the Soviet Union, initiated on June 22, 1941, was used instead. The term Great Patriotic War was coined by Soviet propaganda in an attempt to unite this oppressed nation – or more precisely, this multinational society – under one banner, i.e. the “homeland” slogan. With the love of the homeland they wanted to cover the memory of the crimes committed by the Bolsheviks on their compatriots from the Autumn of 1917 until the Summer of 1941, and at the same time to ease national tensions.”

Balkenkreuz and the Ukrainian tank

Hence, in the tweet shared by the Russian Embassy in the UK, we can see a photo from World War II. Most likely, it was taken during Operation Barbarossa, i.e. the Third Reich’s invasion of the USSR. It shows the Panzerkampfwagen III tank with the crew sitting on it. The Balkenkreuz, which indeed resembles the marking on the Ukrainian tank, was marked with a red circle.

This cross appeared in several different versions, and it was modelled on the Luftwaffe markings. Its most famous form is a black isosceles cross with a white outline, not overlapping at its ends. It was this version of the marking, and not the plain white one, that was used during Operation Barbarossa (invasion of the USSR) and in the later stages of the war. An example can be seen in the photo below.

However, looking at the cross on the Ukrainian tank, it is worth paying attention to the surface it is located on. It is not painted on uniform material, but on bricks of a reactive armour. There are clear gaps between them, which makes it impossible to paint a uniform marking. On other surfaces, the cross is plain white, without any ornaments. Seeing the Balkenkreuz on the vehicles of the Ukrainian armed forces requires a lot of ill will and can be seen as an attempt to discredit the troops of our eastern neighbour. The following photo perfectly shows how the surface impacts the appearance of the cross.

Attempts to link the markings on Ukrainian military vehicles with Nazi symbolism are part of a broader trend of defaming the Armed Forces of Ukraine. Since 2014, Russian propaganda centres have been running a disinformation campaign aimed at proving that the main political force in Ukraine is the Nazis. However, there is no conclusive evidence that the markings on the vehicles are connected with those used by the Wehrmacht. The isosceles cross has a long tradition of use in Ukrainian army, dating back to Cossack times. Therefore, it is not particularly surprising that for this reason, as well as out of pure pragmatism, this marking was used by the Ukrainians during the Kharkiv offensive.