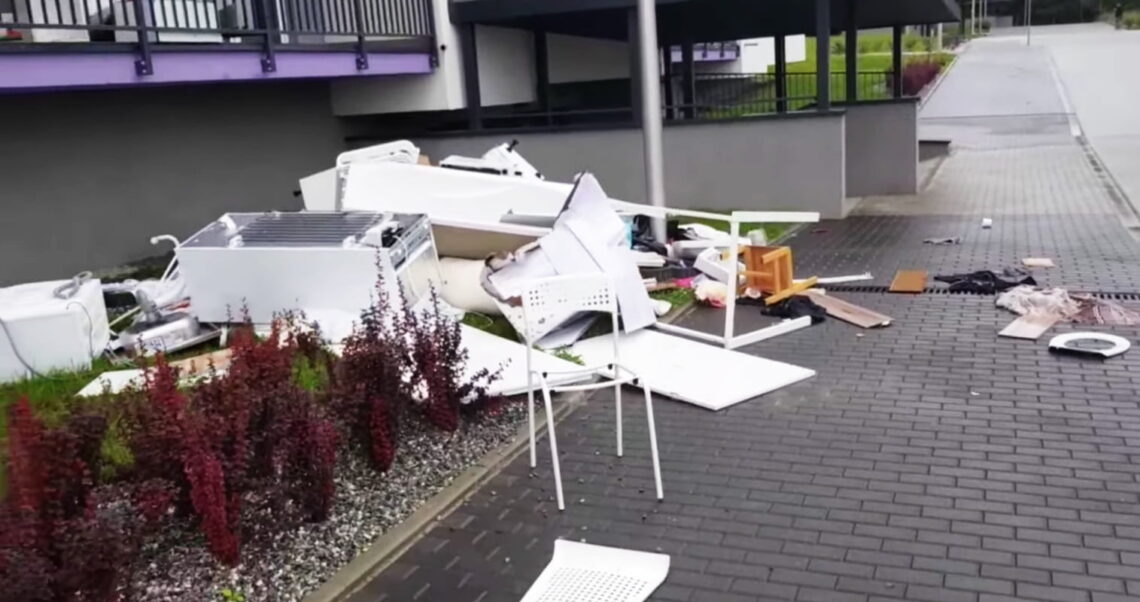 In the early morning of 21 September, an apartment settled by a Ukrainian citizen was demolished in Kliny housing estate in Kraków. The video and photos from the scene of the event contributed to several false anti-refugee and anti-Ukrainian narratives. We contacted the spokespersons of the Małopolska Police and the Municipal Police in Kraków, who explained this situation. This article will be updated.

Claim:
Demolition of an apartment in Kliny estate in Kraków was a protest against evictions
Our rating:

The discussed event took place in Kliny housing estate in Kraków, in one of the blocks built as part of the Mieszkania+ program. In March 2022, after the Russian invasion of Ukraine and the influx of women and children from Ukraine, the Governor of the Małopolska region allocated 186 out of the total of 481 apartments from the program for approx. 500 refugees free of charge. Their accommodation was administered by the Foundation of Polish Development Fund. Agreements, of which all tenants were aware, were signed with a specified term of lease until the end of September.

The case was first described by a resident of the estate on her Facebook account. In the original post, which can be seen in the revision history, she suggested that more than one person had devastated the apartment. After the police spokesperson’s statement, the post was edited. In the post, the resident also wrote that Ukrainians “took away flats from families from Kraków”, although the transfer of flats took place on the basis of the governor’s decision.

In the video recorded on the spot by MIR– Media Information Relationships profile, the following comment can be heard:

This is how refugees from the east repay. They were supposed to move out, so they trashed the whole apartment. They even ripped out the bathtub.

Reporters of Gazeta Krakowska talked on the spot with Ukrainians, who denied that they were planning a revolt because of the end of the lease agreement. On the contrary, they are looking for new places to stay, and some families already moved out in August.

Next, the recording features a dramatic soundtrack, and one can hear another comment that:

There’s a guy throwing stuff out of another apartment.

This is not true. In an interview with us, mł. insp. Sebastian Gleń, a spokesperson for the Voivodship Police in Kraków, confirmed that the troublemaker of Ukrainian origin acted alone. Currently, as a result of injuries suffered, the Ukrainian is in hospital and will be questioned after the weekend. The material with false theses was also shared on TikTok, Telegram and YouTube.

What were the motivations for the demolition?

According to the information received from podkom. Piotr Szpiech, a spokesperson of the Małopolska Police in Kraków, police officers conducting an interview at the scene learned that the Ukrainian was undergoing psychiatric treatment, which was the reason for his lack of call up for military service, and gave him the opportunity to cross the border with his family and settle in the Kliny estate a few weeks ago.

Gazeta Krakowska contacted the man’s wife. The woman claimed that she did not know her husband’s intentions, adding that he had had problems at work recently. She wasn’t in the apartment during the incident.

The one-off situation in the Kraków housing estate became the reason behind a series of nationality-based hate speech acts. The man who demolished the apartment suffered from mental illness and could have had a breakdown due to problems at work. The demolition of the apartment had nothing to do with the term of the lease agreement, and the remaining half a thousand Ukrainians, mainly women and children, have enjoyed accommodation without any problems for the last 7 months.
Once the man is questioned, we will update the article with new information.