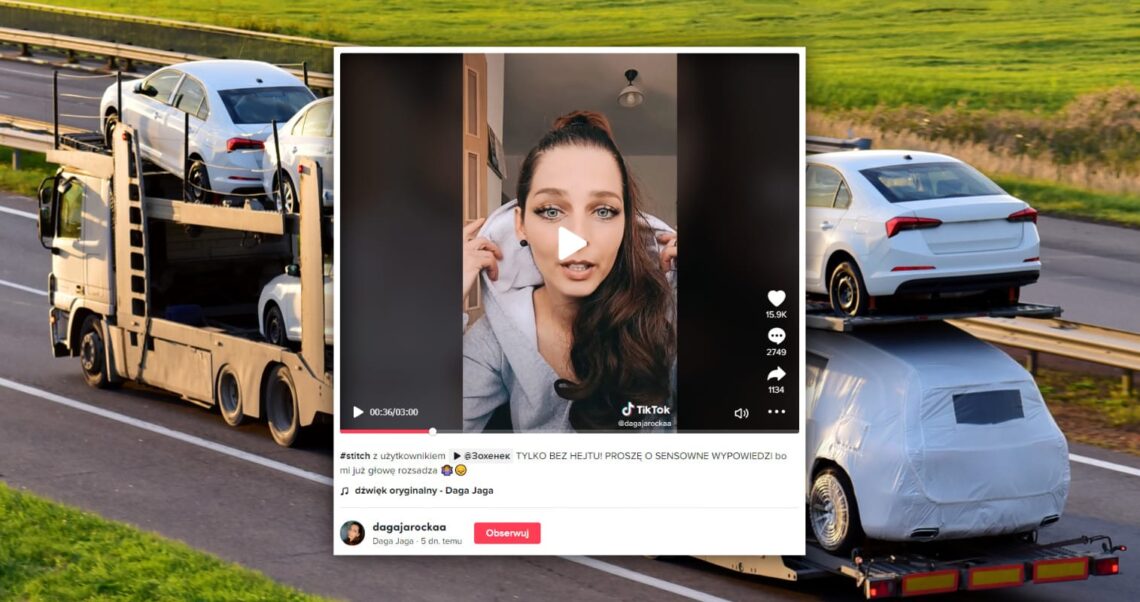 The war in Ukraine is still the dominant topic in the media space. Narratives intended to evoke resentment or doubt about refugees staying in Poland are still popular on social media. One such example is a video on TikTok, where the author asks several suggestive questions about this topic. Many of the issues mentioned there are very popular on social media and have already been raised many times. So we decided to take a closer look and analyse them in a series of short articles. In this text, we deal with the first question asked in this recording: “Why are cars being exported from Poland on such a scale to a country at war?”

The video appeared a few days ago on TikTok. It was shared by dagajarocka channel, whose main areas of interest are astrology or magic. The topic of Ukraine was hardly discussed there. The author, however, decided to record a video regarding this issue, which turned out to be quite popular among viewers. The recording does not present specific theses, but several suggestive questions were asked. This is a popular rhetorical technique, thanks to which in theory the author cannot be accused of any specific agenda, because she “only asks questions”. However, as she admits at the end of the video: “Ukrainians are not my brothers.” The video is also largely based on anecdotal evidence, and no specific source was quoted to support the claims contained therein.

In this text we deal with the first question asked in this recording: “Why are cars being exported from Poland on such a scale to a country at war?” Such a question is intended to raise doubts among viewers and undermine the intensity of the conflict. It also indirectly suggests that war may even be profitable for Ukraine. Such narratives have been emerging for a long time (here is an example), so claims such as those in the video should not be underestimated. They fit into the wider disinformation and propaganda narratives. Of course, they are unfounded, and the economic situation of Ukraine is very difficult. The answer to the question asked in the video is relatively simple, yet prosaic and is associated with quite obvious market mechanisms.

The reason why the import of cars to Ukraine during the war increased so sharply was a temporary lifting of customs duties, excise duties and VAT on used cars by the authorities. The goal was to make up for the losses caused by the war in the car park of the armed forces and civilian users. The above-mentioned fees constitute up to 30% of the value of the imported car. Therefore, it is hardly surprising that in this period cars were imported en masse, even during the armed conflict.

During the first two months of the invasion, ca. 220,000 vehicles were destroyed. The regulation lifting the fees entered into force at the beginning of April 2022. This resulted in a very sharp increase in the import of used cars. In March 2022, only 2,000 cars were imported. However, in the period from 9 April to 19 May this year, more than 90,000 used vehicles crossed the Ukrainian border. The fees were restored by the Ukrainian authorities on 1 July, 2022. This caused discontent and protests, including at the border crossing in Zosin. The result was a predictable 7-fold decrease in the import of used cars. In the period from April to the end of June, over 202,000 used vehicles were imported to Ukraine.

A large part of the imported cars came from Poland. According to estimates, during the first half of the year it amounted for 36.9% of all used cars imported to Ukraine. Yet, in the period from January to March, it was multiple times lower than later on. The top three car models imported from Poland were: Volkswagen Passat, Volkswagen Golf and Skoda Octavia. Among the models in the top fifteen, only one had the average price exceeding PLN 20,000 (Audi A6). According to experts from the Samar Automotive Market Research Institute, the following factors contributed to such a large import of cars from Poland:

(…) favourable geographical location: delivery of cars to Ukraine is easier and cheaper; a fairly large selection of used cars in an affordable price category; the number of sales offers for particular models – especially diesel – which may be even higher than in Germany.

Attention was also drawn to the almost non-existent language barrier between Poles and Ukrainians, which may be a problem in contacts with sellers from the West. In addition, bureaucratic procedures are not complicated, and the purchase does not take much time. Hence, there is nothing surprising in the fact that people from our country willingly sold cars at good prices, while being able to bypass the time-consuming process of looking for a buyer. Ukrainians, on the other hand, could import cars relatively cheaply and easily. For both sides, the situation was simply beneficial. There is no mysterious mechanism behind this process, but a simple market calculation that works even in spite of the ongoing war.

Cars for the Armed Forces of Ukraine

In addition to importing used cars for sale purposes, some of them were transferred, usually free of charge, to the Ukrainian armed forces. However, we do not know exact figures. For obvious reasons, the most popular choices were off-road vehicles, especially pick-ups. In Poland, numerous institutions as well as private individuals organised collections and handed over vehicles to our eastern neighbours. Such vehicles are very desirable by soldiers at the front, because they can be used for reconnaissance, quick transport of small units or rapid evacuation of the wounded. Their lifespan is short, so a constant influx of them to the fighting units is very much needed. For instance, 22 such cars were donated by forest rangers. Such activities are also undertaken by private individuals, both Ukrainians living in Poland, as well as Polish citizens. A renowned journalist and reporter Jacek Hugo-Bader or Mateusz Wodziński, better known as Exen were among those organising such events. However, there are far more activities aimed at obtaining off-road vehicles for Ukraine. Dozens of collections for this purpose can be found on the Internet.

There are many manipulative techniques designed to arouse dissension between Ukrainians and Poles, some of them less obvious than others. One such technique is to ask seemingly innocent questions with the intention to raise doubts and uncertainty about a given topic. A good example of such manipulation is the discussed TikTok video. Contrary to suggestions, the mass importation of cars from Poland applies only to used vehicles. In addition, it lasted in a certain time window, when the Ukrainian authorities lifted fees on the import of cars. However, the losses in our eastern neighbour’s car park are very high and it can take years to make up for them. Some of the used vehicles imported into Ukraine are intended for the armed forces.