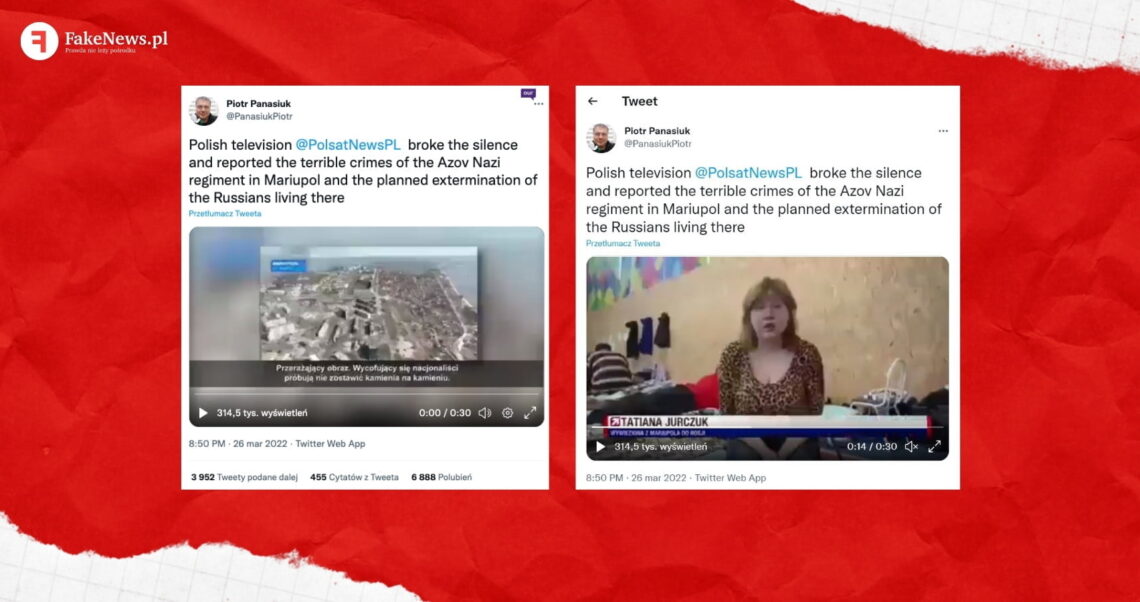 The war in Ukraine has been going on for over two months. Fighting takes place not only on the ground and in the air, but also in the information space. More and more false information is appearing on social media. Its goal is to increase public support for one of the warring parties, discredit the other, and spread disinformation. An example of such a narrative are the accusations of committing war crimes against the civilian population by Ukrainian soldiers.

On March 26, 2022, Piotr Panasiuk, the former leader of the Confederation in Lublin, posted a tweet, in which he claims that Polsat News informed about the crimes committed in Mariupol by Ukrainian soldiers against Russian-speaking civilians. The sensational content of the post is to be made credible by a fragment of the material broadcast in “Wydarzenia”. It tells about the situation in a besieged city.

Claim:
Polsat News reported on war crimes committed in March 2022 by the Azov Regiment in Mariupol, besieged by the Russians.

In the past, the activist from Lublin already shared pro-Russian content and created posts that fit in with the narrative imposed by the Kremlin. He also denied the massacre in Bucha and the attack on the maternity hospital in Mariupol. Before the beginning of the Russian aggression, he disseminated information about Ukraine’s planned attack on separatist people’s republics, as well as materials intended to discredit and ridicule the incumbent president of Ukraine.

The material used to create the manipulation was broadcast in the March 25, 2022 edition of “Wydarzenia”. The tweet containing the manipulated video spread across the Internet like wildfire. It has been retweeted thousands of times, including in English, German and Japanese. The original footage begins with a bird’s-eye view of the destroyed Mariupol. In the material of the Polsat News service, you can first hear the reporter’s comment, and then you can see a recording showing the scale of the destruction in the city. The journalist informs viewers that the material recorded with the drone was also broadcast by Russian television, and shows the effects of Russian artillery fire. He also notes that Russian television broadcasts photos of the destroyed city solely for propaganda purposes in order to distort the real course of the military operations.

After these words, a fragment of the Russian news program is shown, in which the above-mentioned recording was used. Then the narrator begins to translate the Russian commentary accompanying the recording, in which words are spoken about retreating Ukrainian nationalists trying to “leave no stone unturned”. This is where the video that Piotr Panasiuk shared on his profile begins. Thanks to this, the viewer is convinced that this is the original Polsat material with a journalistic commentary in which information about crimes committed by Ukrainian nationalists is reported.

The next part of the original material of “Wydarzenia”, which was also included in the manipulated video, provides information about the tragedy of the civilian population and the forced deportation of Mariupol’s inhabitants to Russia. This fragment is accompanied by the words of a woman resident of the besieged city deported to Russia, who testifies in front of the camera that Ukrainian nationalists tried to murder Russians living in the city. This fragment is to authenticate the sensational content of the post shared by the Confederation activist. On April 5, 2022 Piotr Panasiuk posted a tweet with the previously missing beginning of the material broadcast in ”Wydarzenia”. He also pointed out that he wanted to show the testimony of the woman deported from Mariupol to Russia.

Recordings of this type have long been produced at the request of Russian secret services, as reported by Business Insider and Meduza. The above-mentioned websites used the example of another recording broadcast on the Russian state television RIA Novosti, which shows a young girl deported to Russia, telling, among other things, about the crimes of the Azov Regiment. These are standard measures used by Russian propaganda that have been observed for years.

Other information about war crimes allegedly committed by the soldiers of the Azov Regiment is very difficult to verify due to the lack of sources other than Russian. It is worth noting, however, that during the current conflict, soldiers of the regular Ukrainian army most likely did indeed commit war crimes against Russian prisoners, as evidenced by several drastic videos on social media. Investigations are ongoing in these matters. However, there is no evidence of Ukrainian war crimes against civilians in Mariupol.

In the past, the Azov Regiment sometimes actually failed to treat both its enemies and civilians in a manner consistent with international conventions. The offenses of Ukrainian soldiers are described in two reports by the United Nations High Commissioner for Human Rights (the first describes the period from November 16, 2015 to February 15, 2016; the second, from February 16, 2016 to May 15 of the same year).

The content of the reports on Ukrainian war crimes committed against the civilian population in Mariupol, on the other hand, fits in with the pro-Kremlin narrative that justifies the commencement of military operations by the Russian Federation in Ukraine. There is currently no reliable evidence of such actions by the Azov Regiment.

Polsat News did not inform about alleged war crimes committed by the Azov Regiment in Mariupol. After comparing both materials – the one posted on Twitter with the original material broadcast by Polsat News – one can see the key differences. In the manipulated recording shared by Piotr Panasiuk, the words of the Polsat journalist were removed. The video begins when the narrator starts translating the Russian commentary, i.e. where the Russian propaganda was in fact copied. This gave the impression that it was the Polsat News reporter who was reporting the crimes committed by Ukrainian soldiers in Mariupol. This was not the intention behind the material broadcast in “Wydarzenia” and this is plain manipulation tactics.

A Business Insider article about a recording produced at the order of FSB: https://www.businessinsider.com/video-woman-accusing-ukraine-war-crimes-russian-fake-report-2022-3?IR=T

A Meduza article about a recording produced at the order of FSB: https://meduza.io/en/feature/2022/03/30/a-refugee-s-video-testimony-about-atrocities-committed-by-the-azov-battalion-made-the-rounds-on-russian-state-news-it-came-from-the-fsb

Russian disinformation in Eastern Europe from June 27 through July 4, 2022 – a summary report 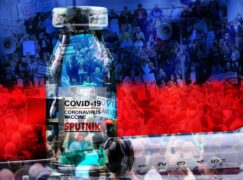 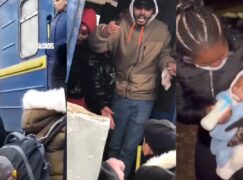 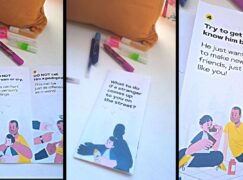