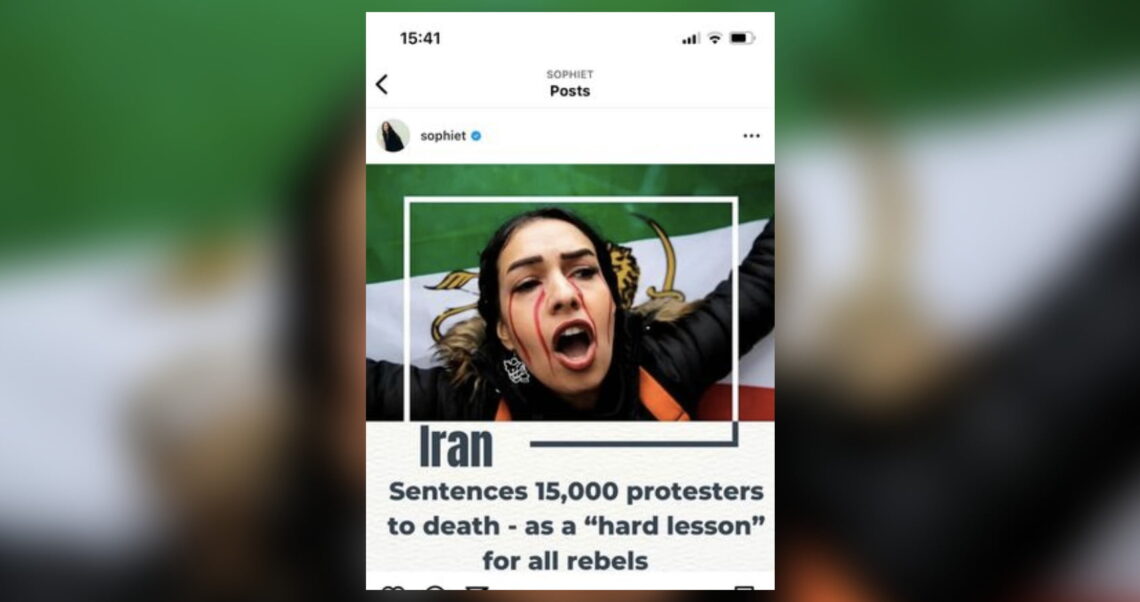 In connection with the death of Masha Amini, a 22-year-old Iranian woman who died in unexplained circumstances in custody after being arrested by the morality police for wearing her hijab in an inappropriate way, a wave of protests is taking place in Iran. An estimated number of 14,000 arrested demonstrators was reported by Javaid Rehman, United Nations special rapporteur on human rights in Iran at the beginning of November. A few days later, the number of 15,000 inmates was announced by Karim Sadjadpour of Carnegie Endowment. On 6 November, the Iranian parliament passed a resolution addressed to the judiciary, calling for the exemplary punishment of the arrested demonstrators. On this basis, misinformation appeared on the Internet suggesting that the legislators’ appeal was synonymous with a death sentence for all imprisoned protesters.

Canadian Prime Minister Justin Trudeau tweeted about the alleged death sentence for 15,000 protesters. The post that had gained great popularity has already been deleted from his profile.

Information about the passing of the death penalty for the arrested was also provided by the Polish media, for instance by Wprost or Rzeczpospolita. Onet wrote that Iranian deputies:

“decided to impose the highest possible penalty on those arrested after the protests. This means that as many as several thousand people may be sentenced to death.”

What it more, the title of the article states that Iran introduced death penalty for rebels on 6 November.

Death penalty in Iran and protests

As reported by the Iranian Human Rights Organisation, the number of fatalities in clashes with the police during current demonstrations has reached at least 342, including 26 women and 43 children, and according to official figures, at least 20 protesters have been sentenced to death. In 2022 alone, 477 executions have already been carried out in Iran. According to Amnesty International, in 2021 Iran ranked second only after China in terms of death penalties.

The current number of victims of the regime, including the number of people arrested, is reported in an updated document by Human Rights Activists in Iran. As of 16 November, the number reached 16,033 detainees.

Already in 2015, Amnesty International informed that:

They (death sentences) are applied either for vaguely worded or overly broad offences, or acts that should not be criminalized at all, let alone attract the death penalty. Trials in Iran are deeply flawed, detainees are often denied access to lawyers in the investigative stage, and there are inadequate procedures for appeal, pardon and commutation.

The resolution of the Iranian Parliament and the death penalty

Iranian parliament’s resolution of 6 November addressed to the judiciary, a fragment of which we present below, was supported by 227 out of 290 Iranian deputies. It reads:

We, the representatives of this nation, ask all state officials, including the Judiciary, to treat those, who waged war [against the Islamic establishment] and attacked people’s life and property like the Daesh [terrorists], in a way that would serve as a good lesson in the shortest possible time.

Under Iranian law, the death penalty is decided by criminal courts. Courts of first instance deal with murder or rape cases. After the Islamic Revolution in 1979, revolutionary courts were established to deal with crimes related to smuggling or terrorism. These acts are punishable by death sentences. The court may also decide to carry out the execution in public.

Undoubtedly, the word terrorists used by Iranian deputies when referring to the protesters clearly indicates what punishment they expect from the court. However, the legislators’ appeal is in no way binding on the judiciary in Iran. It also does not change the law in force in Iran.

The death penalty, including public executions, is legal under Iranian law and is commonly used, including as a punishment for current protesters. However, the Iranian parliament did not vote on the death penalty for the arrested demonstrators taking part in the protests triggered by the death of Masha Amini. Only a resolution was passed, which is by no means binding on the Iranian judiciary. Therefore, suggesting that Iran has sentenced several thousand people arrested for attending protests to death is unauthorized speculation. We also consider the information provided in the Polish media to be manipulation.