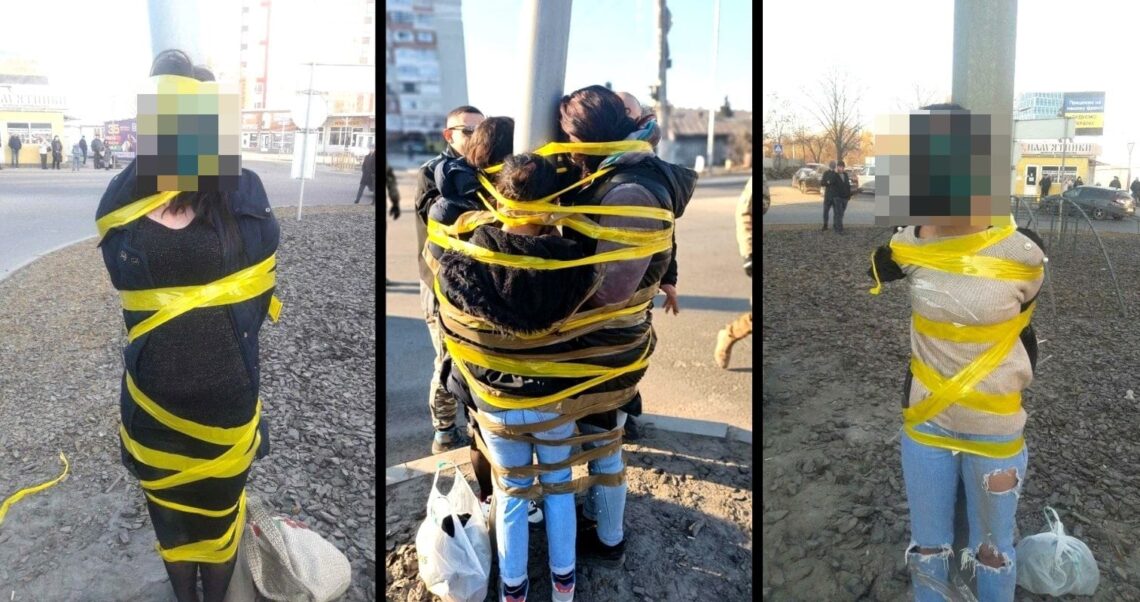 On 21 March, on the Russian social media platform Zen Yandex, photos of people with painted faces and tied to a pole were published. The photos were accompanied by the following comment (our translation below):

This information quickly began to be reproduced not only in Russian-speaking communication channels, but also, among others, on Telegram, Facebook, Reddit or Twitter. These photographs were described as evidence of the use of Romani people as human shields by the Ukrainian army.

What is the source of disinformation about the use of the Roma?

On the same day, i.e. on 21 March, the Ukrainian news portal Varta 1 published a short post describing the event taking place in Lviv. Photographs attached to the post show young women, most likely of Roma origin. They were tied to a pole and their faces were painted green. Some also had cards attached to them with the inscription “I am a thief”, which can be seen in one of the photos:

According to Varta 1, which relies on eyewitness testimony, these women were “punished” for attempted theft. The situation was to happen on the city bus, where they were spotted, pulled out of the bus and “punished”. It can be assumed that this was not a one-off activity and what we can see is a common practice. Following this lead, we used the Google search engine to look up this query: цигани ловили левів [the word “циган” (Gypsy) is considered pejorative and Roma or Romani should be used instead, but in this case the use of this word is justified by the methodology of the analysis].

The fourth search result refers to the Varta 1 portal:

The article, or rather a short note, was published on 1 June, 2021. According to Varta 1, there was a social arrest of a person accused of a petty theft. The detention was carried out by the group “Л.О.В.Ц.I” [Eng. H.U.N.T.E.R.S].

After typing in the Google search engine “група «Л.О.В.Ц.I»”, these are the top three results: 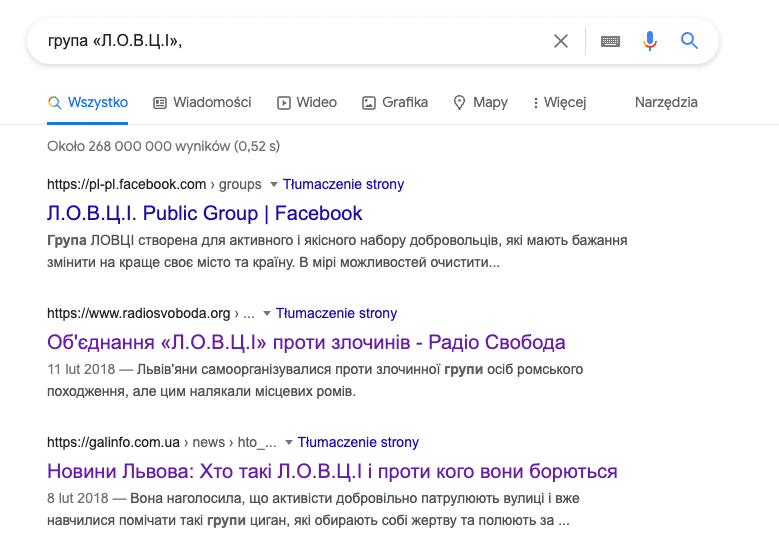 The article was published on 11 February, 2018 and describes the activities of the “H.U.N.T.E.R.S” group. Its formation was announced on 23 January, 2018 by Roksolana Lisovska, and the group was supposed to be a civic response to widespread thefts in Lviv, which the local police were unable to cope with. In other words, “H.U.N.T.E.R.S” is a grassroots organisation that “hunts down” and “punishes” petty criminals by socially stigmatising and humiliating them, and by publicising their images.

In turn, the first link leads to the official group on Facebook. It has 9.6 thousand members and according to its description:

The Hunters Group actively recruits the best volunteers who want to change their city and country for the better. As far as possible, we purge Lviv of thieves and injustice. The motto of the group is: “Who, if not us”.

It was in this group that the photos discussed in the article appeared for the first time. They were posted by the founder of the group, Roksolana Lisovska:

These are not racist practices

Members of the group were repeatedly accused of racism and Romophobia, which in turn was repeatedly denied by the founder of the group. According to her, the Hunters’ actions are not racially motivated, and they intervene against all cases of theft. She also spoke favourably in public about her local Roma community. The content that is published on the “Hunters” group also does not seem to focus on the Roma community.

In an interview with Fakenews.pl, Julian Kondur, a Romani human rights defender working with and for the Romani community in Ukraine in the Chirikli organisation, does not associate this activity with Romophobia or the persecution of Romani people. He points out that these practices are much more common and they are “war practices”, which are conditioned by the culture and the processes taking place within the Ukrainian society since 2014. Kondur deconstructed these photos also for the Czech organisation fighting for the rights of the Romani people, and his analysis can be found on the Romea.cz portal and on his private Facebook profile:

These practices are investigated and analysed by Zmina, a Ukrainian non-governmental organisation focusing on protecting human rights.

Looters are socially stigmatised and humiliated by being tied to a pole, and their photos are publicly shared. Some are forced to confess and apologise in front of a video camera. Now that Ukraine has been the victim of a hostile war, looting is particularly condemned in the society, and looters are considered collaborators and enemies. This is manifested not only by social moods and practices, but also by changes in legislation implementing harsher punishment for theft.

The term “war practices” does not only mean that they are the result of war activities, but also that they are in a way directed towards the Ukrainian society, with the goal of strengthening its morale and maintaining the fighting spirit. There are photos of “punished” looters shared by the official Facebook profile of the Ukrainian police, e.g. here, here and here. The mayor of Irpin also referred to the information about the arrest and punishment of 26 looters on the territory of Irpin.

The thesis about the use of the Romani people as human shields during the war in Ukraine was a disinformation aimed at showing Ukrainians as racists and Romophobes with Nazi tendencies, i.e. capable of sentencing people to death because of the colour of their skin. This was to substantiate the “process of denazification” of Ukraine and justify Russia’s invasion.

Nevertheless, it should be noted that the described practices of social “punishment” violate fundamental human rights. Tying people to a pole and stigmatising them deserves special condemnation and is not justified even during the war.