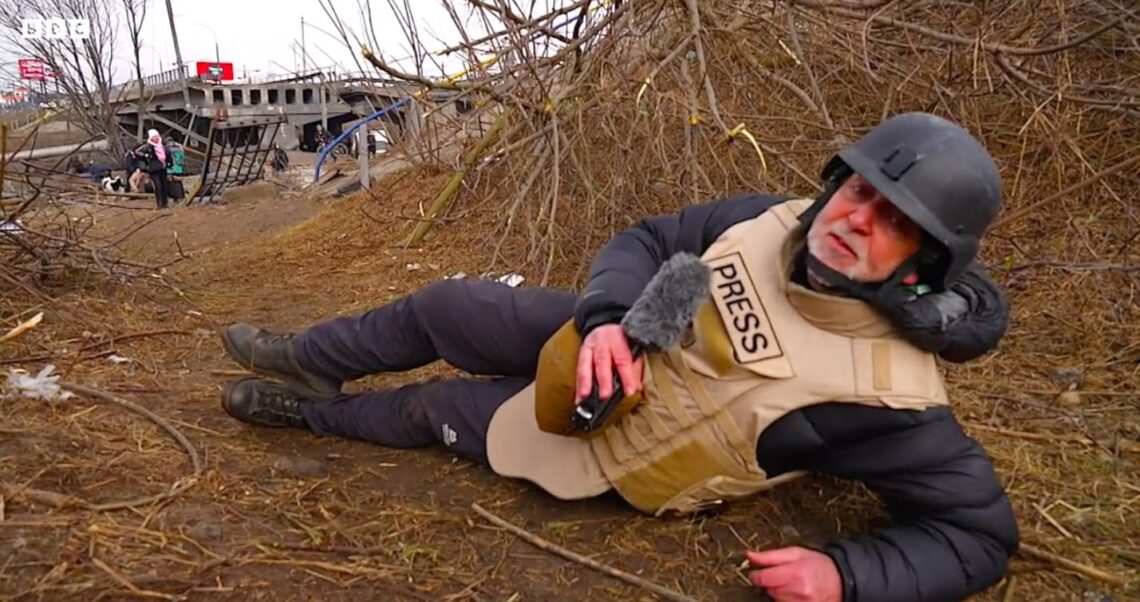 On 4 October, 2022, a photo of Jeremy Bowen, a BBC reporter, lying on the ground during his coverage of the war in Ukraine, began circulating on social media. People re-sharing the photograph claimed that he only pretended to report on the situation during Russian shelling. This was allegedly confirmed by a woman standing in the background, who looked in his direction and, unlike Bowen, seemed calm and composed. The goal was to ridicule the journalist and show him in a bad light. Was the reporter really just pretending?

Claim:
Jeremy Bowen, a BBC reporter, pretended to be under fire during a report from Ukraine.
Our rating:

Such a narrative was reproduced by numerous social media accounts. It gained wide exposure in Italian, German or English. Similarly, the case did not go unnoticed in Poland as well. This post on Twitter was particularly popular. Numerous accounts on Telegram also described this photo. They included pro-Russian profiles, such as Ruch Oporu or News Front Polska. The photo also appeared on Facebook, where it gained popularity after being shared on the profile of Sympatycy Konfederacji (Confederation Sympathizers).

The origin of the photograph

This photograph is actually a still frame from a BBC broadcast from March 2022. Jeremy Bowen and his crew recorded the evacuation of civilians from Irpin. At that time, Russian troops were approaching Kyiv, and the Ukrainian army was desperate to stop the enemy’s march on the capital. The city was under heavy artillery fire, becoming an extremely dangerous place for the civilian population.

The BBC footage perfectly shows the danger the inhabitants were facing. We can see them falling to the ground every now and then or ducking, as bullets fly over their heads. Unfortunately, there were casualties. During the evacuation, a mortar shell killed 4 people, including two children. It struck near where the BBC team was staying, which shows that reporters were also in great danger.

The fact that the description of the photo reproduced in social media is a manipulation was pointed out by Italian journalist David Puente. The discussed still frame can be seen at about 2:08. Watching this fragment, one quickly realises that artillery fire and nearby explosions can be heard all the time in the background. The insinuations in some posts that the woman in the video was returning from shopping are also false. In fact, she carried her belongings in her bags, fleeing from Irpin. We can see how just a few seconds earlier she takes cover, fearing an explosion of an incoming projectile. When she got up, she moved towards the reporter and then stopped to probably find the best way out from the riverbank. First, she looked towards Bowen, and then to the right on the stairs with the blue and yellow railing.

In the background, there is a bridge in Irpin, which had been detonated by Ukrainian forces to slow down the Russian offensive. For this reason, residents had to cross the river via uncertain surfaces and narrow footbridges to escape from the front line. As a result, they could not carry too many things with them, hence the woman has only two plastic bags with her. After watching the BBC footage, there is no doubt that the situation Jeremy Bowen found himself in was indeed dangerous.

The still frame circulating in social media was shared along with a suggestive description in place of the original context. This misled many Internet users who unknowingly made fun of the reporter. In fact, Jeremy Bowen was actually on the front lines, and his life was in danger. You can easily tell by watching the BBC footage.