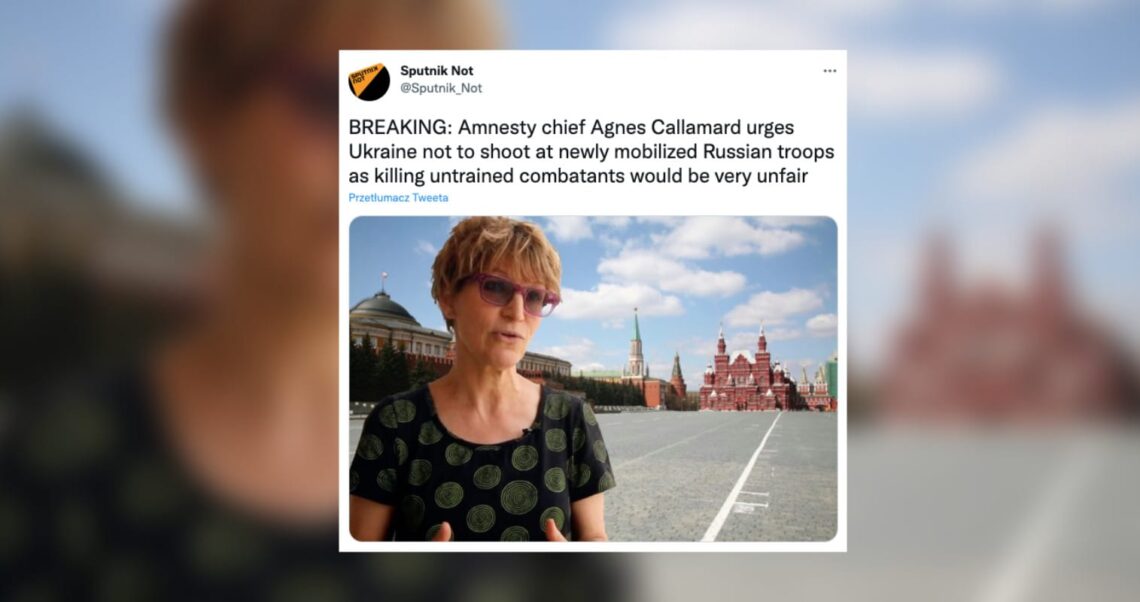 On 28 September 2022, the Sputnik Not satirical account published a post on Twitter, featuring a photo of Agnès Callamard, Secretary General of Amnesty International, and the following description:

The tweet turned out to be a very successful clickbait, and many people fell for it.

Claim:
The Head of Amnesty International calls on Ukraine not to shoot at newly mobilized Russian troops.
Our rating:

Sputnik Not, as the name suggests, has nothing to do with the Russian government news agency, which is clearly emphasised in their Twitter account description. The authors mostly ridicule Russian propaganda.

The post in the misinterpreted context was popular on Facebook and was repeatedly shared. The writer Rafał Ziemkiewicz, already famous for his research, also fell for the satirical post.

Amnesty International on the Russian-Ukrainian War

In preparing his tweet, Sputnik Not referred to the August report by Amnesty International, which stated that:

(…) Ukrainian forces have put civilians in harm’s way by establishing bases and operating weapons systems in populated residential areas, including in schools and hospitals, as they repelled the Russian invasion that began in February.

A few days later, the organization issued a statement in which it apologised for the pain and anger caused by the press release on the tactics of the Ukrainian troops, and pointed out that during the preparation of the report, serious errors were made in the area of consultation and communication.

Due to the confusion caused by the report, Per Waestberg, who founded the Stockholm branch of Amnesty International in the 1960s, resigned from membership.

AI has published numerous reports on the current war in Ukraine. One of the latest ones condemns the attack by Russian troops on a civilian convoy in Zaporozhe on 30 September.

The Sputnik Not account does not hide the fact that it has nothing to do with the Russian news agency. It only publishes satirical content mainly aimed at Kremlin propaganda. Before sharing a post, one should at least verify the basic things like its author. In particular, public figures should be expected to do so.