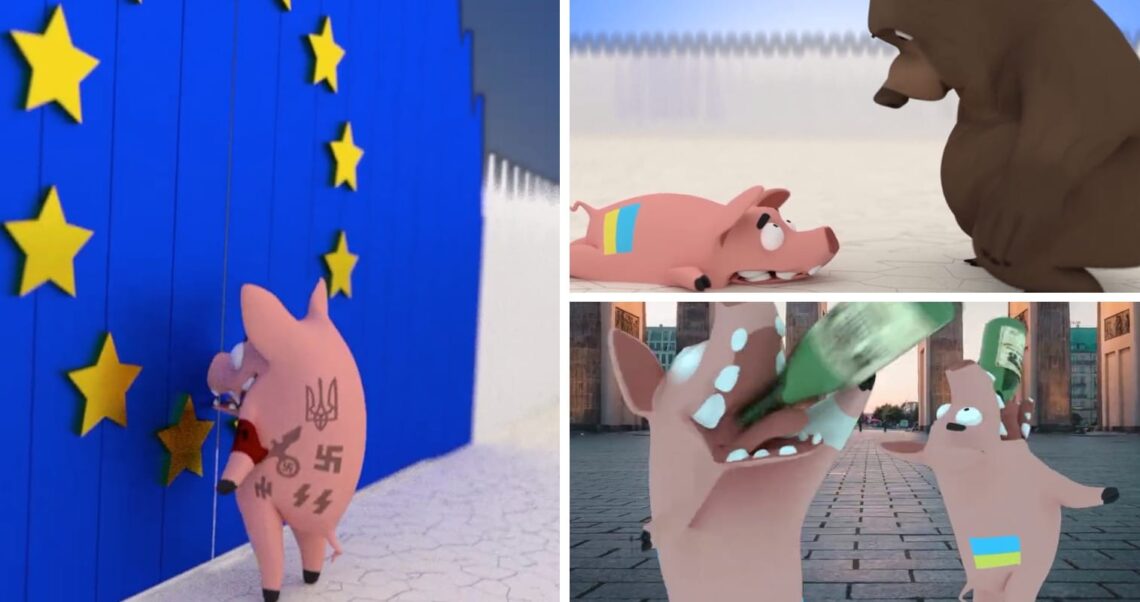 On 17 October, Russian websites published an animated film whose main characters are a pig with Nazi tattoos and a Ukrainian flag, and a bear with a band in the colours of the Russian flag. The plot focuses on the propaganda portrayal of the European Union as a place morally corrupt and of Ukrainian refugees as demanding and quarrelsome. Interestingly, those posts usually feature a duplicated description informing that the cartoon was filmed by an Israeli television channel INN. In this article, we explain that the film is Russian, and the Israeli INN TV does not exist at all.

Claim:
Israeli TV channel INN created a cartoon about Ukraine depicting it in a bad light.
Our rating:

The publication of the animation in the false context coincided with the statement of the Israeli Minister for Diaspora, Nachman Shai, who stated that in the face of Iran’s military assistance to Russia, Israel should also provide military help to Ukraine. Until now, Ukraine could count on medical and humanitarian support.

The next day, the former President of the Russian Federation, Dmitry Medvedev, replied to the Israeli Minister on his Telegram account. The politician threatened Jerusalem that any military aid for Ukraine would destroy any and all relations between Russia and Israel.

On 19 October, the Israeli Minister of Defence responded on the pages of the Jerusalem Post saying that Israel will not provide any military systems to Ukraine.

Israeli INN TV? No, this is Russian propaganda

The Kremlin propaganda decided to go with the Israeli context, using an animated film for this purpose. The edited video with a misinforming description gained popularity on Twitter. The fake Tweet posted by Russian film producer Igor Lopatonok was reshared more than 1000 times and viewed more than 50 thousand times. The Israeli origin of the film was to be indicated by the logo of the INN TV channel added to the original video in the upper right corner. However, such channel does not exist in Israel. Interestingly, the Russians completely overlooked the fact that the moral at the end of the video is in English and Russian.

Probably for this reason, a board was added at the end of the animation suggesting that the video was created by the INN TV channel from Israel. The Hebrew inscription ישראל נגד נאציום can be translated as “Israel against the nation”, whereas ערוץ הטלגרם means “Telegram channel”.

Twitter user @Arrim_kz found the tv station from which Russian propaganda derived the idea for the logo. It’s actually Inn Channel from India.

At the same time, he noted that there was a media network in Israel in the past called Arutz Sheva, whose English name was Israel National News (INN), but it was closed in 2003, and its logo does not resemble the one added to the animation at all.

Who is the author of the animation?

Thanks to the reverse image search technique, we managed to find the original film from before edits suggesting the authorship of the alleged Israeli television. On the same page, there is a link to a Telegram channel Свинка В Обмороке, which roughly means “Pig half-fainted”, on which in turn you can find this post of 11 October with the discussed animation. This is the 10th episode of a series.

As the author writes about himself in the description of the channel, his name is Zenka and he is a Russian citizen living in Russia.

There is no TV channel by the name of INN in Israel, to which Russian propaganda attributes the authorship of the animation. The author of the film is a Russian citizen. The association with Israel has a current political background regarding the discussion about the possible military support of Ukraine by Jerusalem.