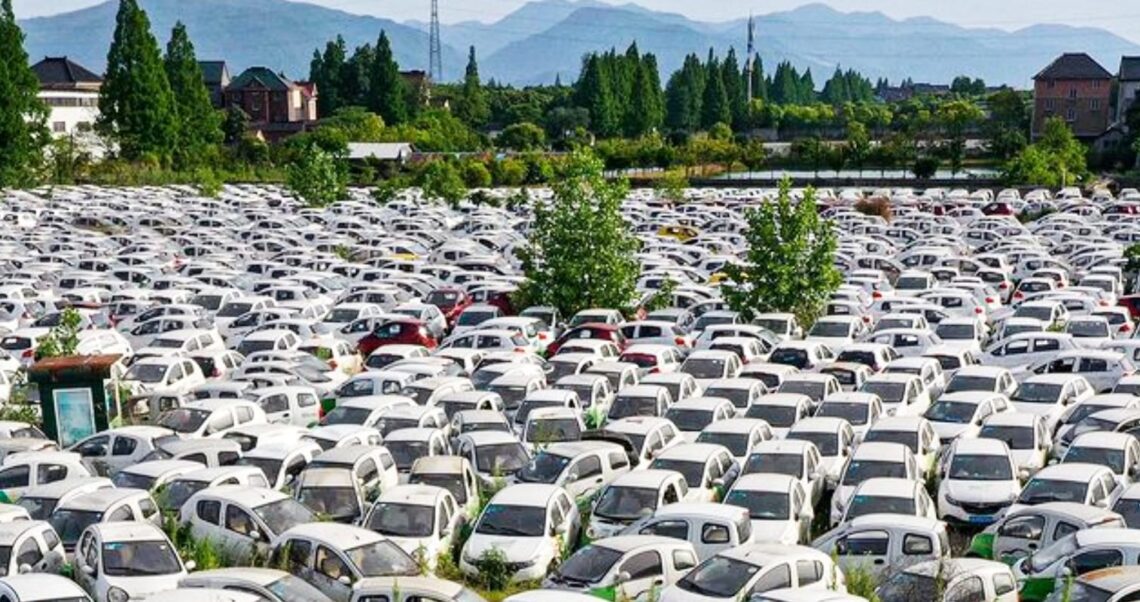 Photos of cemeteries of electric cars have been appearing on social media for some time. We already described a very similar case about a parking for unused “electric cars” in the vicinity of Paris. This time, numerous posts on Twitter and Facebook suggest that this popular photo depicts a cemetery of electric cars in France. The photograph was particularly concerning due to the recent position of the European Commission, which proposed to completely cease the production of combustion cars since year 2035.

Claim:
The photo shows a cemetery of electric cars in France. No one wants to buy them because their batteries are damaged.
Our rating:

It's not really France. This is China. The cars were not intended for sale and not all of them are broken.

The photo indeed shows a cemetery of electric cars.

In fact, the photo was taken not in France, but in China. The cars ended up on the cemetery because they were to be replaced with newer next-gen models. The case was described by AFP and Correctiv.org.

The photo was taken by the founder of the Instagram profile @greg_abandoned. He engages in the so-called Urbex (Urban Exploration), which means he explores abandoned facilities in cities and post-industrial areas. As confirmed by Correctiv.org, the photo was taken on the outskirts of Hangzhou. Two years ago, the case was already described by Chinese media.

The cars in the picture, produced by Kandi Technologies Group, belong to a car-sharing company called Microcity. They were sent to the cemetery because they were to be replaced with newer models. Moreover, numerous car-sharing services went bankrupt in China at that time, so refreshing the fleet might not have been the only reason for the final abandonment of the cars.

As the ex-manager of the company explained:

I had clearly explained at that time that not all of them had problems. Some of them had problems, some could still be used, others were old enough to be sold to another company and disassembled. Second, it had nothing to do with the spontaneous combustion of the battery, most of them were the first generation electric vehicles which had been produced in 2013 and even earlier and should be replaced due to technological progress.

The popular photograph indeed depicts a cemetery of electric cars, yet it is located in China, not in France. According to media reports, the cars were recalled due to fleet modernisation and there were no plans to sell them. However, the future of the vehicles in the cemetery remains unclear. For more than two years, no resale programme has been implemented. They have not been scrapped either.

The far right: from pandemic to war