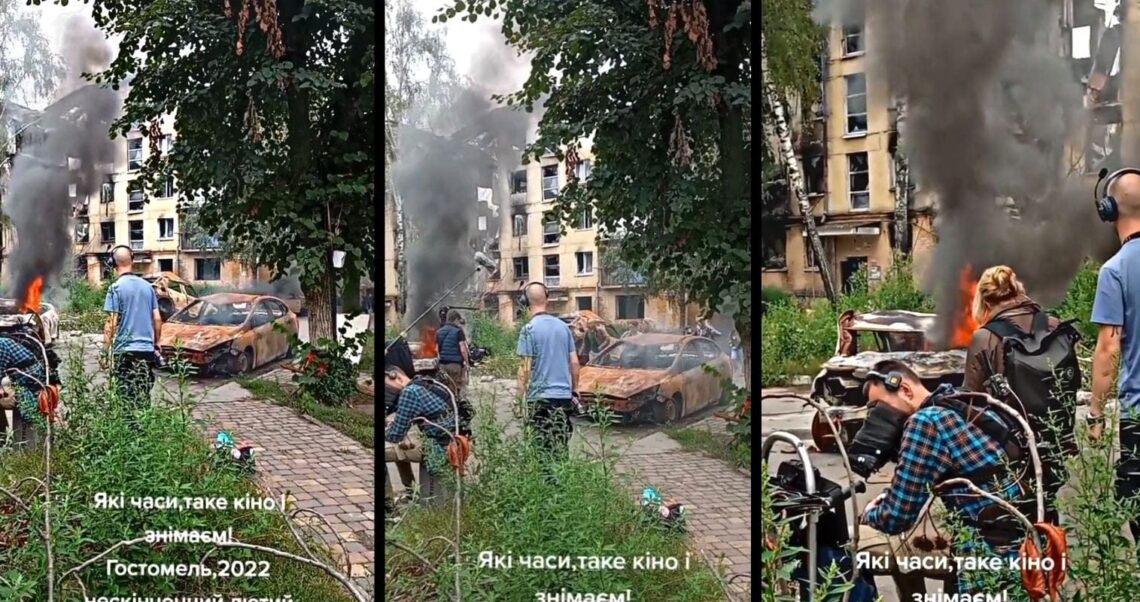 Since 12 August, a video has been circulating on TikTok, Telegram and Twitter showing people running in war scenery on a film set. This material is shared as an alleged “proof” of a hoax prepared by the Ukrainian authorities. The video is often accompanied by additional comments informing that the footage shows a war staging made by Kyiv propaganda with the support from the western media. In this article, we will examine the original source of the recording, and where and how the material has been distributed.

Since the beginning of the Russian invasion, there have been many conspiracy theories in Ukraine. Some of them accuse the Ukrainian authorities of staging the massacres and having actors to play victims of the war. On 9 August, a TikTok account yarikfors posted a video without any comment, in which TV crew filmed several people fleeing a burning building.

This post was enough for commentators to believe that recordings shown by Ukrainian channels with people fleeing the war could be falsifications arranged by the authorities in Kyiv.

In fact, the footage comes from the set of the film Область Героїв / Region of Heroes. It is a documentary about the heroic deeds of the inhabitants of Hostomel, Irpin and Bucha. Journalists of the spamchronicles.com service contacted the filmmakers and asked about the origin of the video in question. In response, they received a confirmation that the material comes from their film set, and the film itself will be screened in cinemas this Autumn.

The location and time of the recording

The recording features subtitles in Ukrainian, according to which the film was shot in Hostomel in February 2022. Hostomel is a settlement in the Kyiv Oblast (Bucha Raion) in Ukraine. In February, temperatures in this area oscillate between -5 and 0 degrees Celsius. However, in the video we can see members of the crew wearing summer short-sleeved T-shirts, while the actors are wearing hats and warm jackets. Green vegetation is also clearly visible. This proves that the recording was certainly not shot in Hostomel in 2022.

The first publication dates back to 12 August when the video was shared by TikTok channel yarikfors. In just 4 days, it had over one million views and over 2,400 comments. On the same day, an avalanche of re-shares began, often with additional comments, on Telegram, Twitter, TikTok, but also e.g. Gloria.tv. Very often, the material was shared by channels known from spreading Russian propaganda in the past.

On 13 August, the tweet with this video and a comment was published by the Russian Embassy in the UK.

“This is how the supported by the Western media #Kiev propaganda is staged. Just look at this video. #StopNaziUkraine”

This tweet is currently flagged as violating the rules on spreading false or misleading information. It cannot be shared or commented anymore. In the comments to various publications comprising this footage, the majority of those commenting seem to believe the message created by the Russian side.

As in the case of the mannequin that was supposed to be used in provocations or fake news about the staging of the Bucha crimes, this time Russian propaganda is also trying to convince the public that the recordings showing Russia’s invasion of Ukraine are not true. In this case, recordings from the film about Ukrainian heroes were used for creating a false narrative.

The mechanisms of distributing this lie remain similar to numerous other attempts by Russia to influence the perception of its criminal acts in Ukraine.