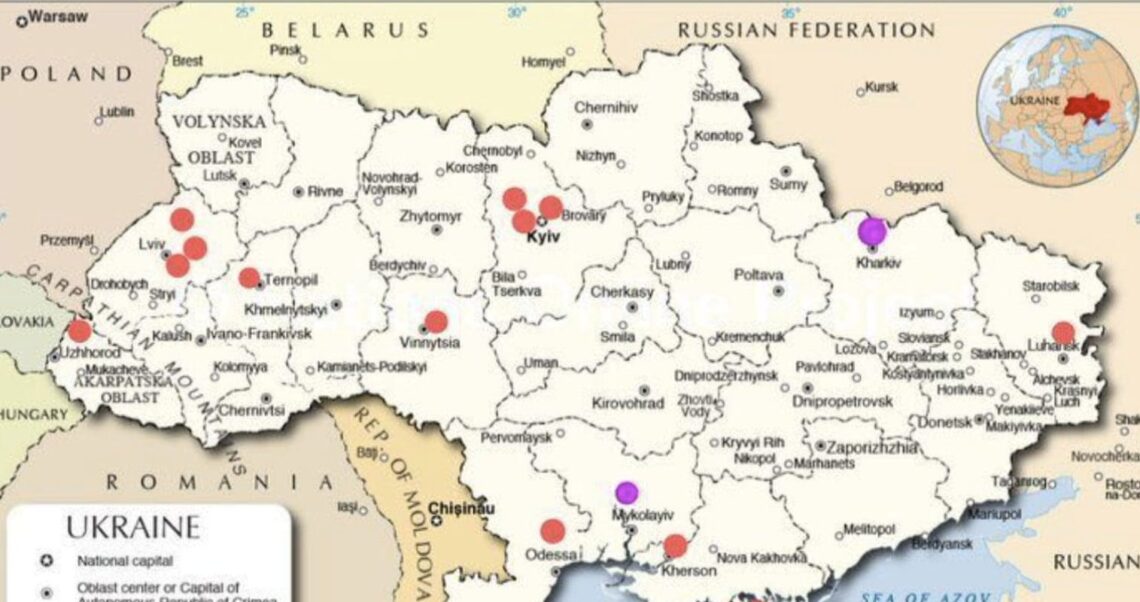 One of the most popular false narratives the Kremlin uses to justify Russian aggression against Ukraine is that of alleged U.S. bio-labs in Ukraine. In this article we explain the origin of this conspiracy theory and how the Russians used it in their propaganda machine.

Origin of the Ukrainian bio-lab theory

The first mention of Russian propaganda about American laboratories in Ukraine appeared in April 2020, during the peak of the first wave of COVID-19. Maria Zacharova, spokesperson for the Russian Ministry of Foreign Affairs, accused the United States of working on the creation and modification of pathogens of dangerous diseases, including for military purposes, in laboratories in the post-Soviet countries.

As we can read in the NBC News article, according to Pyrra Technologies, a cybersecurity company, the first mention of bio-labs appeared in the far-right American social network Gab on February 14, 10 days before the Russian invasion. User @SKYior shared an infographic there called “Exclusive US Biological Laboratories in Ukraine, funded at the expense of the US Department of Defence”. It did not gain much publicity until the outbreak of the war.

On February 24, Twitter user @WarClandestine posted the same map, suggesting that Russia was bombing bio-laboratories in Ukraine. According to the non-governmental organization ADL (Anti-Defamation League), @WarClandestine account is run by Jacob Creech, a National Guard veteran associated with the QAnon conspiracy movement. On February 26, he confessed in a podcast of another QAnon follower that he is responsible for the conspiracy theory about bio-laboratories in Ukraine.

This time, the information about secret laboratories has gained popularity. It was picked up by Alex Jones, the owner of the InfoWars website and one of the most popular conspiracy theorists in the United States. On April 6, Creech was invited to Alex Jones’s program to share live his “discovery”, which in reality was nothing but an image uploaded by an anonymous Gab account.

The Russians take over the narrative

On 27 February, the Russian embassy in Bosnia and Herzegovina published a tweet in which it accused the United States of building military bio-laboratories in which “methods of destroying the Russian nation at the genetic level are being developed”.

On 3 March, Sergei Lavrov, Russia’s Minister for Foreign Affairs, presented his official position and spoke about two US-built war laboratories in which pathogens are reportedly being developed.

On March 6, the narrative about a dangerous biological weapon produced in Ukraine reached mainstream media in the U.S., thanks to Tucker Carlson’s program on Fox News. In this program, Carlson asked: “Why would Ukraine need biological weapons?”. The statement of Victoria Nuland, Under Secretary of State of the United States, confirmed his conviction about the secret Ukrainian bio-labs. During her hearing in the U.S. Senate, she admitted that “Ukraine has biological research facilities, which we are now quite concerned about, as Russian forces may seek to gain control over them”, and “We are working with the Ukrainians on how they can prevent any of these research materials falling into the hands of Russian forces”. These words proved to Carlson the existence of secret laboratories producing biological weapons to be used against Russia.

On 8 March, the Russian Ministry of Foreign Affairs issued a statement, with which Ukraine was accused of preparing biological weapons components in laboratories located near the territory of Russia.

Documents that undermine the conspiracy theory

On 17 March, General Igor Kirillov of the Ministry of Defence of Russia announced at a press conference that the Russian army had obtained documents confirming that the Pentagon was involved in financing military biological projects in Ukraine.

In the context of the damages caused by avian influenza in 2021 in Russia, as a result of which 6 million birds were killed, he referred to the FLU-FLYWAY project run by the Institute of Veterinary Medicine in Kharkiv.  This institute investigated wild birds as vectors for the spread of avian influenza. However, the document presented at the conference featured an infographics that showed the opposite direction of the migration of birds, i.e. from Russia to Europe, than the one suggested by Kirillov, which would prove a threat to the territory of the Russian Federation.

On the same day, at a press conference , Zhao Lijian, the spokesperson for the Chinese Ministry of Foreign Affairs, said:

Recently, U.S. biological laboratories in Ukraine have indeed attracted a lot of attention. According to reports, a large number of dangerous viruses are stored in these facilities. During its military operations, Russia has discovered that the U.S. was using these facilities to carry out bio-military plans.

Lijian did not specify which reports he had in mind. Interestingly, in 2021, the same minister published a tweet with a music video promoting a conspiracy theory suggesting that the COVID-19 coronavirus was produced and leaked from a military installation in Frederick, Maryland, about 80 km north of Washington. This was reported, among others, by the BBC.

Theory about bio-laboratories in Georgia from 2018

The narrative about bio-labs in neighbouring countries threatening Russia is not new. It was already used in 2018 against Georgia.Maria Zacharowa, during her briefing, expressed concerns about the third level 3 biological laboratory in the village of Alekseevka near Tibilisi, currently called the R. Lugar Research Centre, which was opened in 2013.

As we can read on the website of the European Centre for Non-Governmental Projects, the Lugar Centre, named after U.S. Senator Richard Lugar, was built for 150 million dollars from the U.S. budget and has been fully managed and financed by the Georgian Ministry of Health since 2018. During the COVID-19 pandemic, the facility fought against the spread of the disease.

The Lugar Centre is a laboratory with BSL-3 biosecurity level, which means that it meets all the necessary standards for conducting research on bacteria and viruses causing serious, potentially fatal diseases. In addition to Georgian scientists, American researchers from the U.S. Army Medical Research Directorate-Georgia also work there, carrying out tasks e.g. in the field of disease surveillance or vaccine development.

What laboratories in Ukraine really are

Since 1990s, Washington and Kiev have been working together to prevent the proliferation of weapons of mass destruction and combat dangerous diseases. The Defence Threat Reduction Agency, established in 1998, is responsible for the cooperation and runs four programmes in Ukraine. One of the programs is connected with the ongoing propaganda war between Russia and the United States and Ukraine, i.e. the Biological Threat Reduction Programme.

As we can read on the website of the American Embassy in Kiev:

The Biological Threat Reduction Bureau works with partner countries to counteract the risk of the outbreak (intentional, accidental or natural) of the most dangerous infectious diseases in the world. The programme pursues its mission of reducing biological threats through the development of a culture of biological threat management, international research partnerships, and the ability of partners to strengthen biosecurity and bio-surveillance measures. The priorities of the Biological Hazard Reduction Programme in Ukraine are: consolidation and safeguarding of safety-relevant pathogens and toxins and continuing to provide Ukraine with the possibility to detect and report outbreaks caused by dangerous pathogens before they become a threat to its safety or stability.

15 documents detailing the 12 different laboratories and institutions that own or are in the process of obtaining a “work permit with (unspecified) pathogens” have been published on the website of the U.S. Embassy in Ukraine. According to these documents, the majority of laboratories are funded by the United States Department of Defence. The recipients are the Ministry of Health of Ukraine (8 cases) and the State Veterinary and Phytosanitary Service of Ukraine (4 cases).

The laboratories are located in Transcarpathia, Vinnytsia, Ternopil, Lviv, Luhansk, Kherson, Kharkiv, Dnepropetrovsk and Odessa. All of them were created in 2009-2012, and the total cost of their construction amounted to USD 21.3 million.

Disappearing and re-surfacing documents about bio-laboratories

While these documents had been available on the embassy website until the outbreak of the war and are available now, they were removed two days after Russia’s invasion of Ukraine, as reported by a Bulgarian journalist Dilyana Gaytandzhiev on her Twitter account. The fact that the documentation on American investments in bio-laboratories in Ukraine was deleted from the servers of the facility became water for the mill of Kremlin propaganda, examples of which we wrote earlier.

The documents returned to the Washington embassy’s website on March 10, shortly after a statement by the Department of State was published, denying the Kremlin’s narrative of alleged U.S. activities in Ukraine related to the production of chemical and biological weapons. According to the statement, the U.S. fully complies with its obligations under the Chemical Weapons Convention and the Biological Weapons Convention and does not develop or possess such weapons. At the same time, in a statement, the United States accused Russia of running active chemical and biological weapons programmes.

Currently, there are over a dozen laboratories in Ukraine that deal with the prevention of the threat of an outbreak of the most dangerous infectious diseases. They were founded by the United States government, but all of them are currently operated exclusively by Ukrainian entities.

The existence of these laboratories, contrary to the theories spread by conspiracy groups and Russian propagandists, has never been a secret.However, the temporary removal of documents concerning their construction from the embassy’s website at the beginning of the war was detrimental, as it unnecessarily refuelled the Kremlin’s propaganda machine.

Russia has never provided any evidence of the production of biological weapons in Ukrainian laboratories, and the false narrative itself during the current invasion has its source in an anonymous account on the GAB portal.

No, Mykhailo Duda, commander of the UPA, is not a relative of President Andrzej Duda