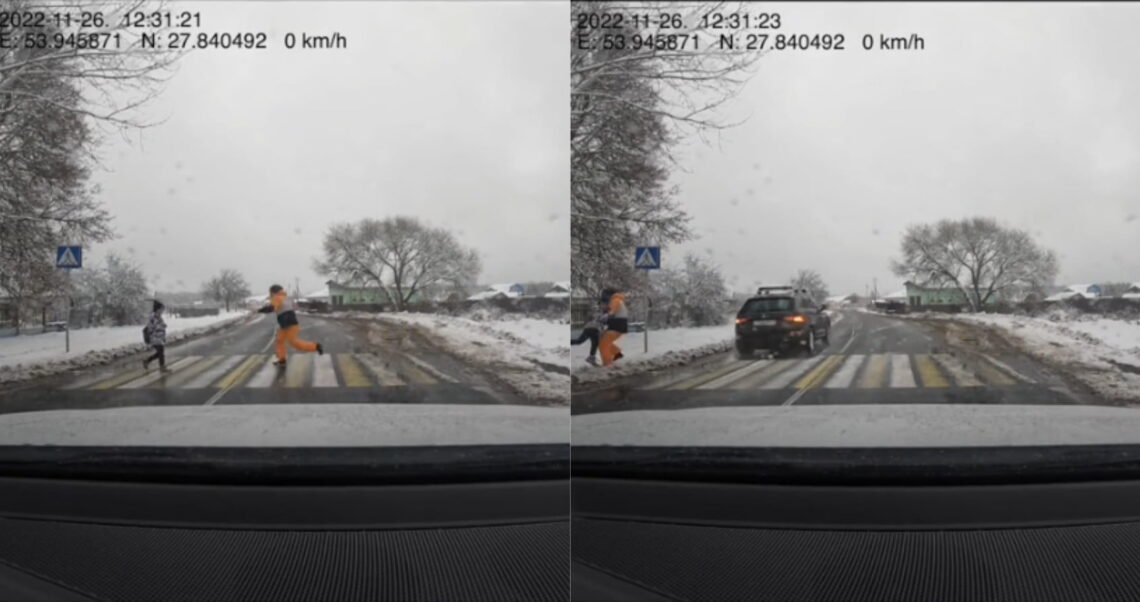 On 3 December, Damian Żurawski, a municipal councillor from Sosnowiec, shared a video on his Twitter and Facebook accounts showing a man saving a child at the last minute from being hit by an SUV driver who was overtaking at a pedestrian crossing. He added the following caption: “He saved a child’s life! A real hero!” The video was shared several thousand times, and it had over 300,000 views on Twitter alone. As it turns out, the scene was actually staged, and the boy was not in any danger.

Claim:
A video shows an everyday hero saving a child on a pedestrian crossing.
Our rating:

In fact, the scene seen in the video was staged for educational material and was directed by Belarusian TikTokers, the Gomylyaev family. They posted a video with a message about being vigilant on the roads on their TikTok account. The captions above and below the image say: “Do not break traffic rules!!!” and “Stay aware and be careful on the roads!”

In the video posted by councillor Żurawski, the watermark from TikTok is gone, which is why it is more difficult to identify the author of the video. The final frames with a message calling for vigilance at pedestrian crossings were also deleted.

Andrei Gomylyaev, the author of the clip, posted a video on his YouTube channel, where he shows behind the scenes of the creation of the original material. It also shows all the actors involved in the production, i.e. Andrei’s family.

In an interview with us, Damian Żurawski admitted that he received the video from a friend and was not aware that the whole thing was staged. He shared the video as a warning. He promised to post a correction on his social media. As a municipal councillor of Sosnowiec, he has made several dozen interpellations regarding road safety in the current term.

The scene in the video is not real, and the child was not in any danger. Staged by Belarusian TikTokers, the film was aimed at reminding drivers to diligently observe traffic rules, and parents to teach children how to navigate through traffic.