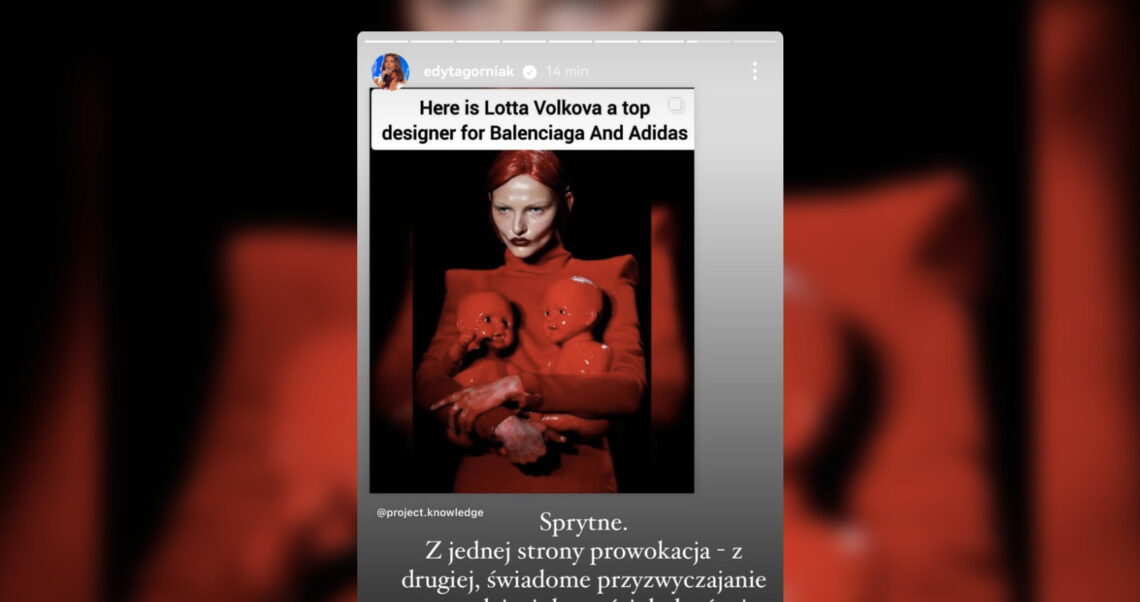 Smart. On the one hand, provocation – on the other, consciously making children’s eyes get used to the content, colours and symbols of the Antichrist. They can no longer hide certain threads, so they want to normalize. The Antichrist was always intelligent…

In this article, we explain the origin of the photo and who the model really is.

One of the most popular Twitter posts with the photo incorrectly attributed to Lotta Volkova was re-tweeted more than 26,000 times and gained over 67,000 likes. Despite the subsequent correction, the tweet with false information can still be found on the @curioslight account. In the same mistaken context, a post with large exposure was posted by i.a. an MMA fighter Jake Shields. Articles with the photo of the model wrongly described as Volkova were also published by numerous websites, such as Arabic Al Bawaba, French PurePeople or Argentinian Qpasó. The natemat.pl portal quoted Edyta Górniak, also claiming that Lotta Volkova is in the picture: “Volkova has bloody hands. It is not known from which session the picture comes.”

The reverse image search technique leads us to a post by a fashion designer Sheguang Hu, and his collection session from 31 March, 2016, that took place in Beijing. An extensive photo coverage from this show was published e.g. by Daily Mail. A video summary of the bloody show can be viewed on YouTube on the AFP account.

Who is the model in the picture?

While searching for information by the name of the author of the macabre collection, we came across a profile of a fashion model Sasha Smirnova. The artist published a post on Facebook, in which she informs that she is the person in the infamous photo. She also confirmed this in a direct conversation with us.

Even though certain resemblance of Sasha Smirnova to Lotta Volkova cannot be denied, the media and public figures should be more diligent in describing photos found on the Internet.

Lotta Volkova was a stylist for Balenciaga and Adidas. She also has a private Instagram account where she posts controversial content. Below is one of many photographs with the hashtag #caniballotta.

A photograph circulating online showing a model with bloody hands, wearing a red outfit and holding two dolls, comes from a fashion show held in Beijing in 2016 and has nothing to do with Lotta Volkova or the Balenciaga fashion house. According to Newsweek, Volkova ended her partnership with Balenciaga in 2018.

In reality, the model depicted in the picture is Sasha Smirnova.