Waxwings visible in the photo are dead, not drunk with alcohol 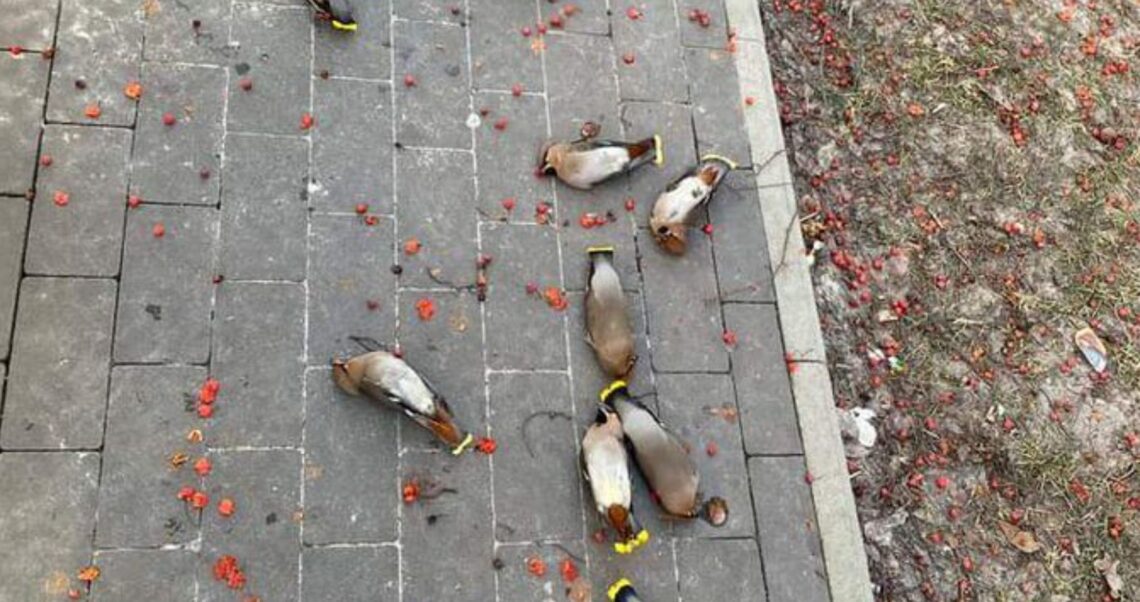 On 9 January, a photo began circulating online showing waxwings lying on the pavement. Numerous posts claimed they are intoxicated after eating fermented fruit and instructed on how to help the birds. Some posts informed that the photo was taken in Poland. In fact, the photo comes from Ukraine and shows birds that died as a result of a collision with a transparent element of a bus shelter.

Claim:
The waxwings visible in the photo are lying on the pavement because they are intoxicated with alcohol.
Our rating:

The tweet, which was later referred to by journalists, had almost 670,000 views (e.g. here and here).

While posts of random Internet users presenting a photo with a false description are not surprising, the reaction of Interia journalists is. They shared the information about “drunk” waxwings, based exclusively on the above tweet.

When describing the supposedly drunk waxwings, gazeta.pl referred to the statement of the director of the Warsaw Zoo, Andrzej Kruszewicz, who stated that apparently the alcohol level exceeded the capabilities of waxwing liver. Further on, however, the article refers to the statements of Fundacja Szklane Pułapki (Glass Bird Traps Foundation) and the Silesian Ornithological Society claiming that opinions on this subject are divided. Nevertheless, the title of the article indicates the state of alcoholic intoxication as the cause of the situation.

In addition, some posts also claimed that the photo was taken in Poland (e.g. on Reddit or Demotywatory).

The waxwings were not drunk – they were dead

Fundacja Szklane Pułapki referred to the situation, noting that birds intoxicated with alcohol would not be able to fly in such a compact formation due to motor coordination disorders. In their opinion, this indicates that the flock hit an obstacle during the flight. The foundation also criticised journalists for the lack of professionalism and reliability in the form of referring to a random Internet user without consulting a specialist.

The Silesian Ornithological Society also published its commentary, noting that some species of birds, such as starlings and waxwings, can consume alcohol in fermented fruits, but they can metabolise it and do not “drink themselves to death”. Also in their opinion, the birds from the photo have most likely fell victims of hitting an obstacle.

The birds in the viral photo are most likely victims of hitting an obstacle – they lie close to each other, which is typical when a flying flock hits, for example, a window. It may or may not have been caused by slight alcoholic intoxication, but also by a firecracker explosion or any other factor frightening the birds.

The photo of the waxwings was taken in Ukraine, not in Poland

As it turns out, the photo is not from Poland – it was taken in Ukraine. The dead birds were lying nearby a bus stop in Chernihiv and were spotted on 8 January by Оlga Nedilko. Below is her post asking for help posted in a group of Chernihiv volunteers helping homeless animals.

The waxwings were taken care of by Tina Lytvynenko, who took care of the 14 dead birds and one that was still alive. She said witnesses saw a group of birds hit the window of a bus shelter on 7 January. The waxwings she collected had broken beaks, legs and torn internal organs. Tina confirmed to our team that the birds were found in Chernihiv at the Heroiv Chornobylia Street (Boiova) bus stop. There are in fact rowan trees growing nearby the bus stop.

Information about the birds was picked up by the Ukrainian media, e.g. Green Post. The authors of the article referred to the opinion of an Internet user running a Facebook page about animals. It claimed that the birds were drunk after eating fermented fruit.

Can birds “drink themselves to death”?

The fruits remaining on trees freeze in winter and thaw in spring, which enables the fermentation of sugars into pyruvate and then into ethanol. Fermentation proceeds until the concentration of ethanol stops further yeast metabolism. Ethanol is then oxidised by bacteria to acetic acid. Hence, a narrow time window of possible alcoholic intoxication exists in the period of late winter and early spring.

Birds most often reported as victims of alcohol intoxication are robins (Turdus migratorius) and cedar waxwings (Bombycilla cedrorum), which are attributed to confusion and difficulty flying when under the influence of alcohol. Due to the type of food consumed, waxwings have a relatively large liver, which in the case of cedar waxwing accounts for as much as 4.9% of body weight (for comparison, it is 2.8% of body weight for e.g. starlings or greenfinches). In addition, the activity of alcohol dehydrogenase (an enzyme used in alcohol detoxification) is much higher in the case of fruit-eating birds compared to those feeding on seeds (in the case of waxwing, it is 15 times higher than in starlings and over 6 times higher than in greenfinches). Therefore, waxwings metabolise ethyl alcohol at a rapid rate (1g of alcohol per 1kg – 900mg/kg/h). In case of starlings, which have a more varied diet, this rate is 270mg/kg/h, and for greenfinches, which feed mostly on seeds, it is only 130mg/kg/h.

There are few reports in the literature of alcohol poisoning among birds. In March 1974 in Canada, 16 waxwings (Bombycilla garrulus) and one pine grosbeak (Pinicola enucleator) were found dead after colliding with windows and walls of the Dauphin hospital building. The birds were supposed to take flight from a nearby wild apple tree, on which there were still heavily fermented fruits.

In April 1989, a case of three cedar waxwings that fell from the roof after eating overwintered hawthorn pommes was described in the USA. Two of them were found dead, and the third bird survived the fall unscathed and was released the next day. The cause of death of two dead birds was indicated as internal haemorrhage following a fall preceded by ethanol poisoning.

In 2012, 90 dead cedar waxwings were found in the suburbs of Los Angeles, CA. The cause of death was indicated as trauma resulting from a collision with hard obstacles during the flight under the influence of ethanol. The source of ethanol, according to scientists, was to be fermented fruits of the Brazilian Pepper Tree. However, these conclusions were drawn based on alcohol found in just a few of the 90 birds.

In all these cases, however, the direct cause of death was not alcohol poisoning itself, but a collision with a hard obstacle after its ingestion.

The problem of collision of birds with transparent elements of infrastructure has been reported for years by Fundacja Szklane Pułapki. The Foundation estimates that up to a million birds may die every year in such events in Poland. Stickers with bird silhouettes, which can be seen on acoustic screens separating motorways, are not an effective form of protection against bird collisions. An example of effective action is putting the so-called green bus shelters, which can be found e.g. in Warsaw. Such constructions feature special markers on transparent surfaces, located at an appropriate distance from each other. For details about these and other safeguards, see the publication created by the Foundation.

How to help birds suffering after collision?

Fundacja Szklane Pułapki also educates about ways of helping birds that have collided with an obstacle. In such cases, the birds are stunned and defenceless, and this condition can persist for up to several hours. During this time, they are vulnerable to predator attacks. What to do in such a situation?

Place the bird you find in a darkened, warm and safe place (e.g. in a cardboard box) with access to fresh air. If the condition of the bird does not improve, immediately take it to the vet. The severity of bird injuries sustained in a collision depends on the force with which it hits the glass. A strong collision usually ends in a cerebral haemorrhage and death. A light one can cause a stun without any serious injuries. However, birds that hit the glass with great force can suffer not only from serious external, but also internal injuries. Both require the intervention of a veterinarian.

A detailed description of how to deal with such a bird can be read in this article by Kacper Kowalczyk and Dr. Ewa Zyśk-Gorczyńska.

Injured pigeons (but not only) are taken care of by volunteers of the Gruszętnik – gołębie w potrzebie foundation. Birds found in Warsaw can be delivered to the Bird Asylum of the Warsaw Zoo – they should be left in a box in the gate facing the Gdański Bridge. If possible, include information about the circumstances of finding them.

If you find a bird intoxicated with alcohol, it is best to move it to a warm and safe place, and when it recovers, release it in the place it was taken from.

A photo of waxwings, which became popular in the Polish Internet space, shows dead birds that died as a result of a collision with a bus shelter in Ukraine. Their arrangement indicates that they flew in a compact formation. Therefore, it is unlikely that the collision occurred as a result of coordination disorders after ingesting alcohol.

Fun fact – due to the international dimension of this fake news, it caused several ironic comments in which Ukrainians wondered when Chernihiv has been annexed to Poland.