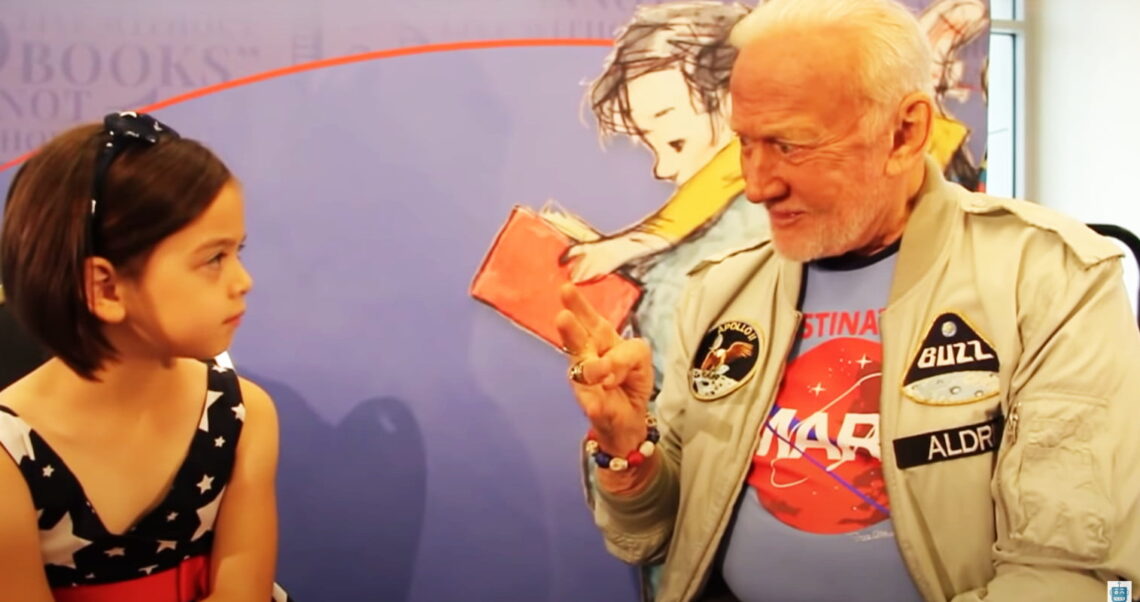 Landing on the Moon is one of the greatest achievements in human history. Almost everybody has heard of it. As in the case of many extraordinary events, this one also gave rise to numerous conspiracy theories. According to them, the Americans have never landed on the Moon, and it was all just a hoax. These hypotheses are supposed to be confirmed by the words of Buzz Aldrin himself, the second man on the Silver Globe. In an interview, he was to say that the landings had never happened and had been fabricated. In fact, his words were taken out of context, and as a result their meaning was completely altered.

Claim:
In an interview in 2015, Buzz Aldrin said that humans had never landed on the Moon.
Our rating:

These statements about Buzz Aldrin’s words circulate in different versions, and come from several interviews given over the years. Another example is this article from 2014 published on Huzlers website. Its content is simply made up, and the entire page is a satirical blog, the purpose of which is primarily trolling. The case discussed in this article is a manipulated and out-of-context statement of the astronaut from 2015, which recently has gained popularity. It was published on a YouTube channel called theroarbots. The words were spoken during an interview conducted by 8-year-old Zoey at the National Book Festival in Washington.

It appeared on numerous social media accounts, including many known for spreading conspiracy theories. The way in which it was taken out of context also differs between videos. Manipulated recordings can be found, for example, on TikTok accounts such as: news4pl, consiousmb or geocentricreality. The excerpts from the interview also appeared on Twitter, and in recent days they have been spread on Telegram channels in Polish.

It is worth taking a look at what was presented in manipulative videos on social media and what was cut out. The question discussed in this text can be heard at the 7:10 mark. The girl asks:

Why has no one been to the Moon in such a long time?

The majority of recordings suggesting that Buzz Aldrin denies human landing on the Moon quotes the following answer by the astronaut (some contain even shorter parts):

However, this is not the whole answer. A part was edited out which explicitly shows that Buzz Aldrin does not deny the landing on the Moon in any way. The next part was as follows:

Money is a good thing. If you want to buy new things, new rockets instead of doing the same thing over, and it’s gonna cost more money. And other things need more money too. So having achieved what the President wanted us to do, and then what, thousands, millions of people in America, and millions of people around the world… You know, when we toured around the world after we came back, the most fascinating observation was signs that said “We Did It”. Not just us, not just America, but we the world. They felt like they were part of what we were able to do. And that made us feel really good.

We tried to transcribe the whole answer, so it may seem a bit chaotic. However, the manner in which Buzz Aldrin formulates his sentences is crucial, as described below.

What’s the actual meaning of the answer?

One can quickly see from the second part of Buzz Aldrin’s statement that in no way did he attempt to deny the Moon landing. He mentions the accomplishment of the mission, the return from the Silver Globe, and the reaction of the global public to this event. It is worth noting that due to his age, the then 85-year-old astronaut had noticeable speech problems. After watching the interview in full, it can clearly be seen that he often skipped words and needed longer breaks to collect his thoughts. His sentences were often imprecise, and sometimes even chaotic. This can be compared to the 2006 interview, in which he spoke much smoother and more accurately.

It is quite clear from the entire context that the first part of the statement refers to the return to the Moon, and not the first mission. The aforementioned imprecision and skipped words may at first be interpreted in a different way. However, after listening to the remaining part of the interview, it is easy to tell what Buzz Aldrin actually meant. The astronaut is also wondering why it was not possible to land on the Earth’s satellite again. The main reason is the lack of sufficient funds.

This is not the first time that the words spoken in the interview by Buzz Aldrin were manipulated. Such situations also occurred several times before. One of them used the words spoken during Conan O’Brien’s show in 2000. They referred to the fact that TV broadcasters, without access to a full live coverage, presented simulations on air to visualise what was currently happening to viewers. This was taken out of context and presented as an alleged proof that no landing recordings were authentic. You can read more about this in this Reuters article.

Another statement from 2015 was also significantly manipulated. It comes from the Oxford Union debate. Buzz Aldrin said: “It never happened.” However, contrary to the claims of conspiracy theorists, these words did not refer to the Moon landing. The question was: “What was the scariest moment during the journey?” The astronaut responded that there was no situation that was particularly scary during the mission. Considering the whole context of the statement, also in this case it is difficult to conclude that Buzz Aldrin spoke about his landing on the Moon. You can read more about this in USA Today and PolitiFact.

Buzz Aldrin was born on 20 January, 1930 in Montclair, New Jersey as Edwin Eugene Aldrin, Jr. In the 1950s, he served in the U.S. Air Force. He fought in the Korean War, where he shot down two enemy aircrafts. He earned his Doctor of Science degree in astronautics from the Massachusetts Institute of Technology (MIT) in 1963. In the same year, he was selected for the NASA space program. In 1966, he was one of the first people to complete extravehicular activity during the Gemini 12 mission. On 20 July, 1969, as a member of the Apollo 11 mission, together with Neil Armstrong, he became one of the first two men to set foot on the Moon. He left NASA in 1971, and a year later he retired from the U.S. Air Force. Since then, he has been advocating for further space exploration, and in particular a human mission to Mars.

The conspiracy theory that humans have never landed on the Moon has been popular for decades. As it is today, in the era of social media. Its advocates are looking for every way to prove their theses, often resorting to manipulation or even lies. Buzz Aldrin’s remarks, taken out of context, are a perfect example of such actions. As an elderly person, the astronaut often speaks inaccurately or skips words, which makes it easier to manipulate his statements. However, if you listen to the entire answer to the question asked in the interview, you can clearly tell that Buzz Aldrin did not deny the Moon landing. He referred only to the issue of returning to the Silver Globe and the reasons why this has not happened to date.