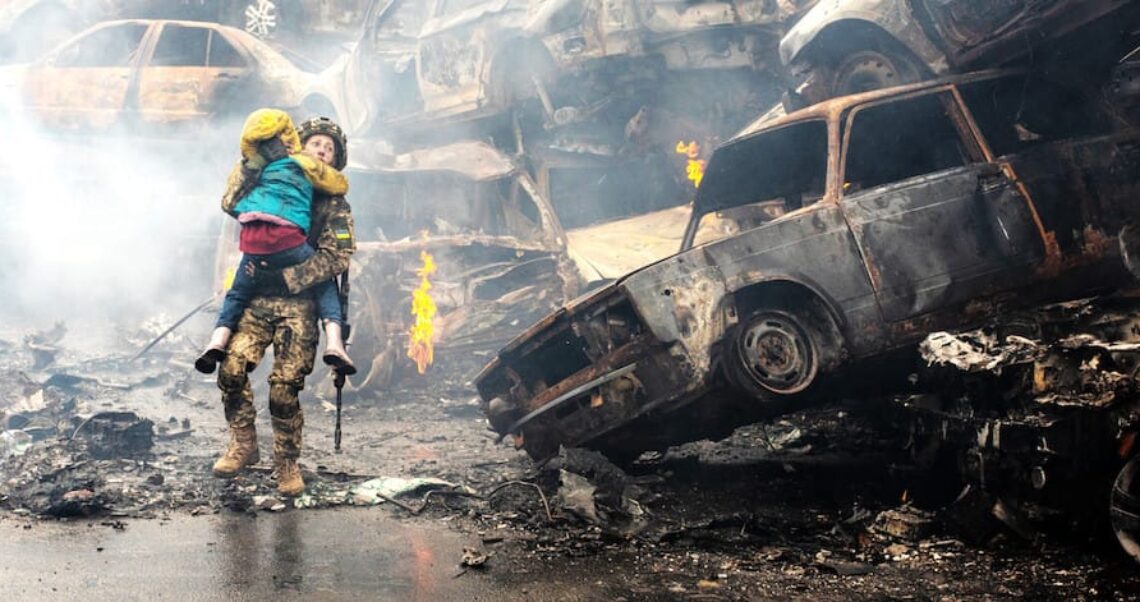 The war in Ukraine is still the dominant topic in the media space. Narratives intended to evoke resentment or doubt about refugees staying in Poland are still popular on social media. Authors of such statements usually use suggestive questions to raise uncertainty about the real situation of Ukrainians. We decided to look at them and analyse them in a series of short articles. This time, we will focus on the question of why, instead of moving to safe areas in their own country, Ukrainians flee abroad. As it turns out, this narrative spread in social media largely consists of half-truths and manipulation.

One of the accusations against refugees is that they are fleeing to Poland instead of staying in western territories in their own country, where it’s safe. Such statements are often made in the form of suggestive questions. This is a popular rhetorical technique, thanks to which theoretically the author cannot be accused of any specific agenda, because they “only ask questions”. Such insinuations are also largely based on anecdotal evidence and are not supported by any specific source.

Narratives maintained in this style were used in a TikTok video discussed in our recent article. The recording has already been deleted and is not available anymore. However, similar statements can be found on other social platforms, for example, in numerous Twitter posts, such as this one or this one. They have been circulating on the Internet for many months, and the answer to them is relatively simple.

Are the western territories of Ukraine really safe?

The short answer is no. All of Ukraine is affected by the war. Even after the withdrawal of invasion forces from the immediate vicinity of Kyiv, the western regions of Ukraine are still threatened by enemy fire. On 22 October, Russian missiles hit energy infrastructure facilities near Lutsk, about 100 kilometres from the border with Poland. From the beginning of the war until 25 October 2022, a total of 484 air raid alarms were announced in the Lviv and Volyn oblasts (both share border with Poland). On 12 October, Russia attacked the energy infrastructure of Lviv. Approximately 30% of the city was left without electricity for several hours. It is worth noting here that not only direct attacks by missiles, but also the lack of electricity or heating remains a threat to the civilian population.

Air raid alarms were announced several times in all or almost all oblasts of Ukraine, for example, on 13 March, 31 July, or 15 October. In addition, there is still the possibility of another invasion from the territory of Belarus. For the time being, it is mainly based on clues and assumptions, but it certainly can be seen an additional argument for civilians to look for safer places other than the west of Ukraine.

Are Ukrainians just running away?

It is not true that Ukrainians only leave the country and do not move to territories further from the front line. According to the statistics of the International Organization for Migration, around 6,200,000 people have become internal refugees since the beginning of the conflict, which means that they left their homes but did not cross the state border. This is yet another proof of the manipulative nature of the discussed narratives.

According to the above-mentioned statistics, about 7,600,000 people left Ukraine. Of the less than 14 million refugees (both internal and international), more than 6 million have returned to their country or region of residence. According to data of the Border Guard, over 7,200,000 people crossed the Polish border. However, as many as 5,400,000 of them have already returned to their country. According to the PESEL database, there are circa 1,400,000 refugees staying in Poland (about half of them are minors), while Rzeczpospolita claims that the actual number might be lower by 300,000. More than 400,000 of them work legally in our country. This means that the vast majority of those who left Ukraine have already returned, which again undermines the disinformation claims discussed in this article.

However, it is worth noting that the coming winter will probably halt the trend of refugees returning to their country. Russia is attacking critical infrastructure throughout Ukraine, which could leave as many as 1.5 million people without electricity. As a consequence, the coming months will certainly be a difficult period for the civilian population due to possible problems with heating and electricity. The Ukrainian authorities urge citizens located outside the country to stay in their current place for the winter, so as not to put more burden on the critical infrastructure that is already struggling. As a result, another wave of refugees could come to Europe in the coming months.

Narratives aimed at arousing aversion to Ukrainian refugees have been circulating in social media almost since the beginning of the war. One such technique is to ask seemingly innocent questions with the intention to raise doubts and uncertainty about a given topic. It seems that this is also the goal of people suggesting that Ukrainians fleeing the war really care about receiving benefits or “Ukrainisation” of our country. This is to be evidenced by the fact that the conflict is not so intense in the west parts of Ukraine, so refugees could take shelter there instead of travelling abroad.

Contrary to these claims, millions of Ukrainians moved to safer areas of their country, despite the continuing high risk of Russian shelling. Many refugees have also returned to their homeland to return to work or join the armed forces there. Data clearly shows that the disinformation narrative presented in this article is largely false and is aimed at provoking resentment towards refugees.